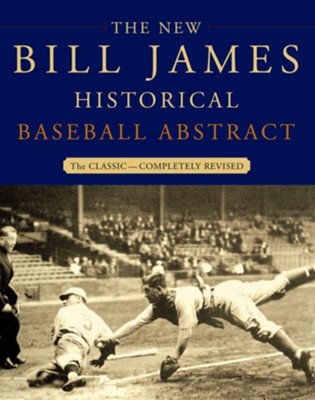 ▼▲
When Bill James published his original Historical Baseball Abstract in 1985, he produced an immediate classic, hailed by the Chicago Tribune as the “holy book of baseball.” Now, baseball's beloved “Sultan of Stats” (The Boston Globe) is back with a fully revised and updated edition for the new millennium.

Like the original, The New Bill James Historical Baseball Abstract is really several books in one. The Game provides a century's worth of American baseball history, told one decade at a time, with energetic facts and figures about How, Where, and by Whom the game was played. In The Players, you'll find listings of the top 100 players at each position in the major leagues, along with James's signature stats-based ratings method called “Win Shares,” a way of quantifying individual performance and calculating the offensive and defensive contributions of catchers, pitchers, infielders, and outfielders. And there's more: the Reference section covers Win Shares for each season and each player, and even offers a Win Share team comparison. A must-have for baseball fans and historians alike, The New Bill James Historical Baseball Abstract is as essential, entertaining, and enlightening as the sport itself.

▼▲
Bill James made his mark in the 1970s and 1980s with his Baseball Abstracts. He has been tearing down preconceived notions about America's national pastime ever since. He is currently the Senior Advisor on Baseball Operations for the Boston Red Sox. James lives in Lawrence, Kansas, with his wife, Susan McCarthy, and three children.

▼▲
I'm the author/artist and I want to review The New Bill James Historical Baseball Abstract - eBook.
Back
Back