Skip to main content
CYBER WEEK SALE! Spot great deals up to 88% off. >
The Big Ten: Another Look at the Ten Commandments
By: Ron Lavin
Stock No: WW023489 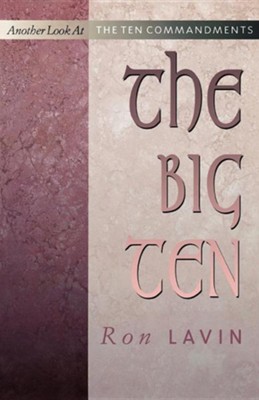 The Big Ten: Another Look at the Ten Commandments

▼▲
"The Ten Commandments continue to provide both significant prohibitions and helpful invitations for living a moral and godly life in the 21st century. I did not post the Ten Commandments on my classroom wall, but they were imprinted more boldly onto my heart." (from the Introduction)
Melvin Kieschnick
Former Director of Parish Education
Lutheran Church-Missouri Synod
The Ten Commandments are universally acknowledged as God's blueprint for human behavior -- yet they seem to be a major focus of controversy in today's headlines. Should these commands from God be prominently featured in classrooms and courtrooms? What difference do God's laws make for multitudes of people who can't even repeat them from memory, much less integrate them into everyday behavior?
In the latest installment of his popular series examining the basics of the Christian faith, Ron Lavin takes another look at the Ten Commandments and suggests they offer a powerful biblical corrective for a society filled with ethical relativism and moral decay. But they are much more than just a list of do's and don'ts -- they are also the foundation for God's invitation to a full and abundant life.
"The Big Ten" is an ideal group study resource -- each chapter includes a "digging deeper" section plus stimulating discussion questions, and there are tips to assist small group leaders. "The Big Ten" is also great for new members, adult Sunday school, and confirmation classes, as well as for personal meditation or sermon preparation.
Ron Lavin is the award-winning author of 20 books, including "Turning Griping Into Gratitude" and "Way To Grow " (CSS). He is the former Pastor-Director of Evangelical Outreach for the Lutheran Church in America, and pastored five thriving congregations, all of which grew substantially under his leadership. Lavin is a popular speaker and church consultant on the dynamics of small groups and evangelism.

▼▲
I'm the author/artist and I want to review The Big Ten: Another Look at the Ten Commandments.
Back