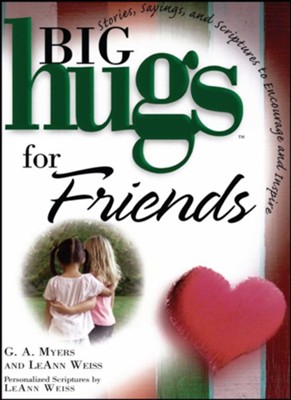 ▼▲
A hug is always a blessing, especially when it comes from a friend. You treasure your friendships because you know how valuable they are. Friends come running when you suffer through the hard times ready to lend a helping hand, and they are the first ones to cheer when you celebrate those special highlights that dot the timeline of your life. There is nothing that communicates your appreciation and thankfulness for friends better than a hug. In this Big Hugs for Friends you will find double the stories, double the sayings, double the messages, and double the scriptures that communicate the warmth and devotion you feel for your friends in a very BIG and meaningful way. Give a hug today; it will last a lifetime.

▼▲
LeAnn Weiss, as a college student, accepted her pastor's challenge to reexamine the Bible as God's personal love letter and source of encouragement. As she started journalizing what God showed her while she meditated on Scripture, her walk with God was revolutionized, and she began writing personalized, paraphrased scriptures featured in the best-selling Hugs Book Series. LeAnn's Encouragement Company was recently featured in Women of Faith speaker Marilyn Meberg's best-selling book I'd Rather Be Laughing.

Gary Myers is a Mid-westerner who grew up and lived in Muncie, Indiana, until the Lord moved him to Columbia, South Carolina, to train for the ministry.

In 1988 he moved his family to West Monroe, Louisiana, to work in the ministry. In 1990 he began working for Howard Publishing Co. on a part-time basis but soon became a vice president and has remained in that capacity ever since.

One can find him leading worship almost weekly in West Monroe. He has four children ranging from ages five to twenty and is married to the love of his life, Kristen.

▼▲
I'm the author/artist and I want to review Big Hugs for Friends.
Back