Skip to main content
SPRING CYBER EVENT STARTS NOW: And it's a really BIG deal! Up to 88% off through 5/24>
The Big Book of Sherlock Holmes Stories - eBook
Edited By: Otto Penzler
Stock No: WW75859EB 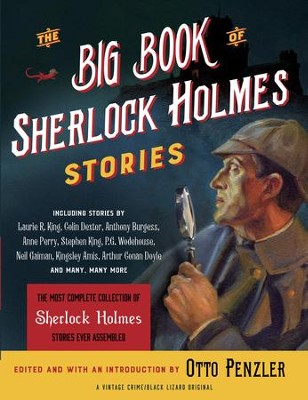 Arguably no other character in history has been so enduringly popular as Sherlock Holmes. Ever since his first appearance, in Arthur Conan Doyle’s 1887 novella A Study in Scarlet, readers have loved reading about him almost as much as writers have loved writing about him.

No matter if your favorite Holmes is Basil Rathbone, Jeremy Brett, Robert Downey, Jr., or Benedict Cumberbatch, whether you are a lifelong fan or only recently acquainted with the Great Detective, readers of all ages are sure to enjoyThe Big Book of Sherlock Holmes Stories.

Including
- Over a century’s worth of cases, from Conan Doyle’s 1890s parodies of his own creation to Neil Gaiman’s "The Case of Death and Honey" (2011)
-  Appearances by those other great detectives Hercule Poirot and C. Auguste Dupin
-  15 Edgar Award–winning authors and 5 Mystery Writers of America Grand Masters
-  Stories by Laurie R. King, Colin Dexter, Anthony Burgess, Anne Perry, Stephen King, P.G. Wodehouse, Kingsley Amis, and many, many more.

▼▲
OTTO PENZLER is the editor of twelve Vintage Crime/Black Lizard anthologies, including The Big Book of Pulps, The Big Book of Black Mask Stories, and, most recently, The Big Book of Locked-Room Mysteries. He lives in New York City, where he is the proprietor of The Mysterious Bookshop.

▼▲
"Catnip for Sherlock Holmes fans. . . . The list of who hasn’t weighed in on the World’s Greatest Detective has become much shorter than the roll of those who have. . . .
The question must be asked: Did we need another one? Yes. And Otto Penzler’s Big Book of Sherlock Holmes Stories is that book. . . . For those who love the cranky inhabitant at 221B, and for those who appreciate good writing about him, and especially for those who can’t get enough of other 'takes' on him."
—The Seattle Times

"Hours upon hours of entertainment for both new fans and Baker Street Irregulars alike."
—Paste

"The perfect gift for the Holmes fan who has everything but the 'Herlock Shomes At It Again' parody written by Anonymous in 1916."
—The Free-Lance Star (Fredericksburg)

"A landmark volume. . . . Essential. . . . Easily the largest collection of Sherlockiana tales ever published. It merits celebration on that basis alone, as a bibliographic event of gargantuan proportions. . . . Show[s] the profound effect Holmes and Watson have had on popular culture and on other writers of crime fiction."
—Booklist (starred review)

"The breadth of this anthology, which spans over a century and includes everything from straight pastiches and parodies to fully developed whodunits, is but one of its virtues. . . . The variety of approaches  is an eloquent testament to Conan Doyle’s genius in creating such an iconic character. . . . Perhaps Penzler’s most significant contribution is rescuing from undeserved obscurity talented writers who have captured the Watsonian narrative voice and combined it with brilliant deductions and mesmerizing plots. . . . This volume is a must for all fans of the great detective."
—Publishers Weekly (starred, boxed review)

"Sir Arthur Conan Doyle wrote 60 stories about Holmes, and more than 6,000 have been penned by other authors since. This collection gathers the best of those stories from Holmes admirers. . . . The pieces are separated into categories, which makes choosing a story more fun for the reader. . . . A must-have for all libraries. This is the only book of its kind to collect so many pastiches dedicated to Holmes, 83 total. Fans of the fictional detective will find great joy in this tome."
—Library Journal (starred review)

▼▲
I'm the author/artist and I want to review The Big Book of Sherlock Holmes Stories - eBook.
Back
Back