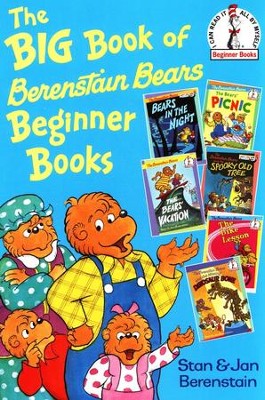 ▼▲
Kids and parents alike adore the Berenstain Bears, and this collection of six Berenstain Bears stories is the perfect addition to any child's library! Children will learn important life lessons along with the Bear family (especially Papa Bear!) Stories include:

▼▲
Stan & Jan Berenstain began writing and illustrating books for children in the early 1960s, when their two sons Michael and Leo were young readers themselves. They lived on a hillside in Bucks County, Pennsylvania, a place that still looks a lot like Bear County, where they could see deer, wild turkeys, rabbits, squirrels, and woodchucks through their studio window almost every day—but no bears. The Bears lived inside their hearts and minds.

The Berenstains' sons are all grown up now. Michael worked as an illustrator with his mother, Jan, to create new Berenstain Bears books.  There are Berenstain grandchildren who can even draw pretty good bears. With more than three hundred books in print, along with videos, television shows, and even Berenstain Bears exhibits at major museums, it's hard to tell where the Bears end and the Berenstains begin!

▼▲
I'm the author/artist and I want to review The BIG Book of Berenstain Bears Beginner Books.
Back
Back