Skip to main content
SPRING CYBER EVENT STARTS NOW: And it's a really BIG deal! Up to 88% off through 5/24>
A Year of Biblical Womanhood: How a Liberated Woman Found Herself Sitting on the Roof, Covering Her Head, and Calling Her Husband Master
By: Rachel Evans
Stock No: WW553676 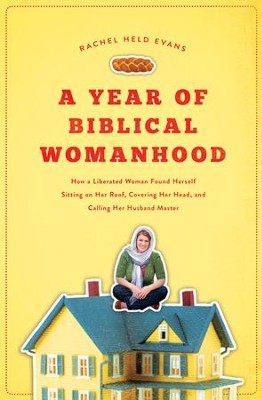 A Year of Biblical Womanhood: How a Liberated Woman Found Herself Sitting on the Roof, Covering Her Head, and Calling Her Husband Master

▼▲
See what happens when a thoroughly modern woman starts referring to her husband as "master" and "praises him at the city gate" with a homemade sign. With a mixture of humor and insight, compassion and incredulity, A Year of Biblical Womanhood is an exercise in scriptural exploration and spiritual contemplation. What does God truly expect of women, and is there really a prescription for biblical womanhood? Come along with Evans as she looks for answers in the rich heritage of biblical heroines, models of grace, and all-around women of valor.

Have you ever wondered what God truly expects of women? Is there really a prescription for biblical womanhood? Does the Bible's idea of womanhood have a place in modern Christianity? New York Times bestselling author Rachel Held Evans embarks on a year-long study of what it means to live by the standards of biblical womanhood.

Strong-willed and independent, Evans couldn't sew a button on a blouse before she embarked on a radical life experiment--a year of biblical womanhood. Intrigued by the traditionalist resurgence that led many of her friends to abandon their careers to assume traditional gender roles in the home, Evans decided to try it for herself, vowing to take all of the Bible's instructions for women as literally as possible for a full year.

Along the way, Evans explores the rich heritage of scriptural heroines, models of grace, and all-around women of valor that we come to know in the Bible. She consults with women who practice these ancient biblical mandates in their own lives--from an Orthodox Jewish woman who changed the way Evans reads the Bible to an Amish community that taught her the true meaning of modesty.

In A Year of Biblical Womanhood, Evans shares her courageous and often humorous journey of:

Join Evans as she dives deep into the lives of the women we meet in Scripture and redefines what it means to live biblically.

New York Times bestselling author Rachel Held Evans (1981–2019) is known for her books and articles about faith, doubt, and life in the Bible Belt. Rachel has been featured in the Washington Post, The Guardian, Christianity Today, Slate, HuffPost, and the CNN Belief Blog, and on NPR, BBC, Today, and The View. She served on President Obama's Advisory Council on Faith-Based and Neighborhood Partnerships and kept a busy schedule speaking at churches, conferences, and universities. Rachel’s messages continue to reverberate around the world.

Proverbs 21: 9 says that “It is better to live in a corner of the housetop than in a house shared with a contentious wife.” While sitting on one’s rooftop is not technically a prescribed punishment for a woman’s belligerence, Rachel Held Evans decided that a minute of roof time per contentious remark of the previous month was an appropriate penance. Because she is accused of making a mockery of the Bible with her new book, A Year of Biblical Womanhood: How a Liberated Woman Found Herself Sitting on Her Roof, Covering Her Head, and Calling Her Husband Master, one might think Evans would be the epitome of the contentious woman, but I, in fact, found the opposite to be true. While undoubtedly bold, Evans is about as gracious as they come, and her book celebrates womanhood rather than promoting division.

About two years ago Evans, a popular blogger and author of the memoir Evolving in Monkey Town, embarked on a twelve-month project of trying to follow the Bible’s instructions to women as literally as possible. Picking themes such as “valor,” “modesty,” “fertility,” and “silence” for each month, she attempted to practice values considered “biblical” for women in various Christian and Jewish contexts. To the confusion of her neighbors, the now-31-year-old Dayton, TN resident refrained from cutting her hair all year. One month, she spent her period outside in a tent. Another month, in an effort to get in touch with her maternal side, she adopted a fussy computerized baby doll intended to discourage teen sex. At other points throughout the year she wore head coverings, focused on cooking and cleaning, cared for the poor, and celebrated several Jewish holidays.

From the beginning, the purpose of Evans’ project was to serve as material for her book, which encourages readers to consider the importance of hermeneutics in how we apply Scripture to our lives. It’s understandable that her book has provoked controversy since she discourages literalistic approaches to the Bible in favor of interpretations and applications more aware of each passage’s literary and historical context. Her conclusions are unapologetically egalitarian, and this fact alone is enough to upset some readers. However, Evans deserves a great deal of credit, even from those who disagree with her conclusions. As much as she hopes to free women from unrealistic or unhealthy expectations that often accompany the idea of “biblical womanhood,” she is not on an angry tirade against complementarianism. In fact, A Year of Biblical Womanhood consistently displays the quality of “gentleness”—one of Evans’ month-long themes.

Evans has struck a magnificent balance, managing to challenge the status quo in evangelicalism without arrogantly dismissing women who understand their faith differently from her. For example, she maintains dialogues with other women throughout the book, learning what she can from Amish and Old Order Mennonite women, Orthodox Jewish women, and Quiverfull families. Similarly, as Evans goes about her year, she could engage in various practices simply to prove the point that women shouldn’t typically be doing so, but instead she seems genuinely open to what she might learn about God, herself, and others by only wearing skirts, changing the dynamics of her marriage, or refraining from speaking in church.

While some Christians will dismiss the book without reading it or hold a prejudice against Evans for her egalitarianism, there is a humble, invitational quality to the book for those willing to engage with its ideas. In this way, A Year of Biblical Womanhood has a great deal to offer Christians from all points on the spectrum: To the complementarian willing to listen, Evans shares the joys of her egalitarian marriage, her appreciation for women of the Bible like Huldah the prophet and Junia the apostle, and her research and reflections on significant passages of Scripture. To the egalitarian willing to listen, Evans is a model of honest searching and respectful conversation, encouraging us to not become embittered towards the complementarian majority in evangelicalism but rather to continue to maintain relationships and thoughtful engagement, fueled by faith, hope, and love.

---by Ashleigh Bailey, M.A. in Theology and M.A. in Family Studies.
---Used with permission from Christians for Biblical Equality

▼▲
I'm the author/artist and I want to review A Year of Biblical Womanhood: How a Liberated Woman Found Herself Sitting on the Roof, Covering Her Head, and Calling Her Husband Master.
Back
Back