Skip to main content
SPRING CYBER EVENT STARTS NOW: And it's a really BIG deal! Up to 88% off through 5/24>
The Origin of Biblical Traditions: Hebrew Legends in Babylonia and Israel
By: Albert T. Clay, Paul Tice
Stock No: WW090650 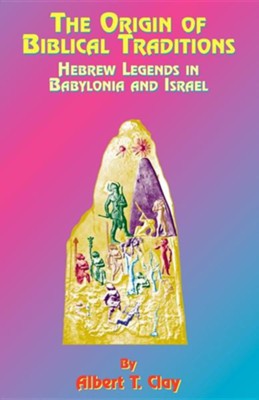 The Origin of Biblical Traditions: Hebrew Legends in Babylonia and Israel

This is an excellent scholarly book, perfect for those researching the beginnings of mankind. In addition to creation stories, Clay covers the stories of the Garden of Eden, the Fall of Man, the Great Flood, and the Tower of Babel. These originals were found on clay tablets, written in cuneiform by the Sumerians. Cuneiform is the very first form of writing ever known on the earth. This is mainly a book on linguistic and archaeological studies by Clay, first published by Yale University Press, so the information is top notch and reliable. It is highly recommended for serious researchers and those curious about the early gods and man's origins.

This book contains irrefutable proof that our oldest Bible stories came from far older sources, and are the oldest stories on the planet. These stories reveal incredible secrets when examined and studied closely, and are, in my estimation, the most important and revealing stories mankind has ever been able to preserve. We are lucky to have found and translated them. This book holds great wealth for those willing to reach in and explore.

▼▲
I'm the author/artist and I want to review The Origin of Biblical Traditions: Hebrew Legends in Babylonia and Israel.
Back