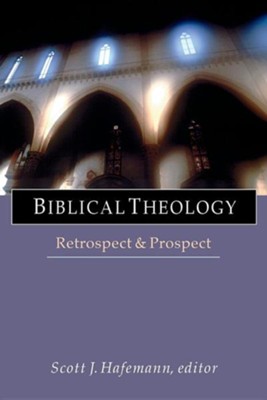 ▼▲
(PUBInterVarsity)What is the current condition of the discipline of biblical theology? For his status report, Hafemann has pulled together a crack team of practitioners who analyze methodological issues, focus on specific problems relating to the Old and New Testaments, and outline possible directions for future investigation. 304 pages, softcover.

Ever since Brevard Childs's 1970 declaration of the crisis in biblical theology, the discipline has faced rumors of its imminent demise. But the patient refuses to die. The doctors continue to argue over how to proceed with treatment and even over whether treatment is worth pursuing, but the patient hangs on. The turn of the millennium appears to be a good time for a fresh assessment of the discipline, where it has been, the status of various questions within it and its future prospects. Scott Hafemann pulls together a crack team of practitioners, scholars from the disciplines of both Old and New Testament studies, to give us a status report. After an introductory essay by Hafemann looking back on recent history, John H. Sailhammer (Southeastern Baptist), Brian G. Toews (Philadelphia College of the Bible), William J. Dumbrell (Presbyterian Theological Centre, Australia), Stephen G. Dempster (Atlantic Baptist), Richard Schults (Wheaton College), Gerald H. Wilson (Asuza Pacific) and M. Jay Wells chart the current state of Old Testament questions. James M. Scott (Trinity Western), Andreas J. Köstenberger (Southeaster Baptist), G. K. Beale (Wheaton College) and Peter Stuhlmacher (Tübingen) examine the state of New Testament studies. Questions surrounding the unity of the Bible are explored by Christopher R. Seitz (St. Andrew's, Scotland), Nicholas Perrin (Westminster Abbey), Stephen E. Fowl (Loyola-Baltimore), Daniel Pl Fuller (Fuller Theological Seminary) and Ted M. Dornan (Taylor University). The prognosis for biblical theology is then suggested by Paul R. House (Wheaton College) and Graeme Goldsworthy (Moore Theological College, Australia).

▼▲
I'm the author/artist and I want to review Biblical Theology: Retrospect & Prospect.
Back