Skip to main content
OUR BIGGEST BARGAIN SALE EVER: Over 6,000 deals at never-seen-before prices ~ through 8/23. Shop now >
Demons and Spirits in Biblical Theology: Reading the Biblical Text in Its Cultural and Literary Context - eBook
By: John H. Walton, J. Harvey Walton
Stock No: WW112021EB 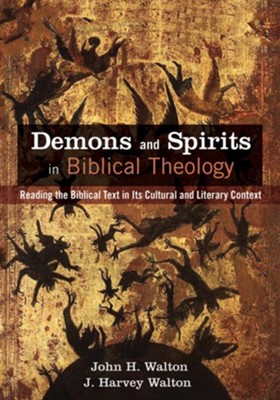 Demons and Spirits in Biblical Theology: Reading the Biblical Text in Its Cultural and Literary Context - eBook

▼▲
Some people believe that a battle of cosmic proportions is raging as Satan and his demons seek to destroy Christians and undermine God's plans. Others believe that all talk of demons in the Bible and theology only reflects pre-modern superstitions that should be re-interpreted in philosophical and psychological terms. Despite their contrasts, both believe that the Bible directly or indirectly intends to teach readers about reality. Another path is possible. What if references to demons in the Bible are similar to references about the shape and structure of the cosmos representing the beliefs familiar to the ancient audience but used only as a framework for teaching about the plans and purposes of God? This approach is here worked out through detailed examination of hermeneutical method, the ancient Near Eastern and Greco-Roman contexts, each of the biblical terms and passages, and the essentials of biblical and systematic theology. Unlike many scholarly treatments of demons, readers will not find an assessment of the metaphysical realities. Instead they will be introduced to a hermeneutical, exegetical, and theological feast regarding what the Bible, understood in its ancient context, teaches.

▼▲
John H. Walton is Professor of Old Testament at Wheaton College. He has authored or edited over twenty-five books, including The Zondervan Illustrated Bible Backgrounds Commentary: Old Testament (2009), Ancient Near Eastern Thought and the Old Testament (2006), The Lost World of Adam and Eve (2015), Old Testament Theology for Christians (2017), and commentaries on Genesis (2001) and Job (2012). J. Harvey Walton is pursuing graduate studies at St. Andrews University and has been involved in various editing and writing projects.

▼▲
I'm the author/artist and I want to review Demons and Spirits in Biblical Theology: Reading the Biblical Text in Its Cultural and Literary Context - eBook.
Back
Back