Skip to main content
The 25 Biblical Laws of Success: Powerful Principles to Transform Your Career and Business - eBook
By: William Douglas, Rubens Teixeira
Stock No: WW88149EB 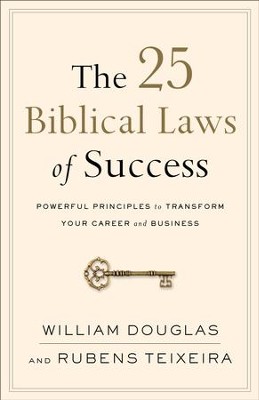 The 25 Biblical Laws of Success: Powerful Principles to Transform Your Career and Business - eBook

By: William Douglas, Rubens Teixeira
Baker Books / 2017 / ePub
4.5 out of 5 stars for The 25 Biblical Laws of Success: Powerful Principles to Transform Your Career and Business - eBook (2 Reviews) Write a Review
In Stock
Stock No: WW88149EB

▼▲
The Bible provides ancient wisdom and values that can lead to a life of great success today. After years of biblical study and personal experience, William Douglas and Rubens Teixeira have identified twenty-five key principles that are of central importance to the pursuit of a successful career and life. In this practical and powerful book, readers will learn

Anyone who wants to succeed in a career or business will benefit from The 25 Biblical Laws of Success.

▼▲
William Douglas is a federal judge in Rio de Janeiro, Brazil, a university professor, a popular speaker, and the author of thirty-five books, including the Brazilian edition of The 25 Biblical Laws of Success, with over 250,000 copies sold. He is part of Educafro, a Brazilian organization working to prevent racial prejudice and promote equal opportunities, and is the entrepreneurship coordinator for social projects for United Missions, part of the Brazilian Baptist Convention. He is also part of the Brazilian Evangelical Academy of Writers.


Rubens Teixeira is former CFO of Petrobras Transporte S.A. (Transpetro) and an analyst for Central Bank of Brazil, as well as a professor, writer, and frequent panelist. He was honored with the National Treasure Prize for his PhD thesis with proposals for the Brazilian economy and is the author of How to Succeed When You Are Not the Favorite. He holds a civil engineering degree and a masters degree in nuclear engineering from the Military Institute of Engineering, a law degree and PhD in economics from the Federal University of Brazil (UFF), and a military science degree from the Military Academy of Agulhas Negras. He is also part of the Brazilian Evangelical Academy of Writers.

▼▲
I'm the author/artist and I want to review The 25 Biblical Laws of Success: Powerful Principles to Transform Your Career and Business - eBook.
Back
Back