Skip to main content
SPRING CYBER EVENT STARTS NOW: And it's a really BIG deal! Up to 88% off through 5/24>
Biblical Principles for Parenting
By: Pastor Larry Youngblood
Stock No: WW792353 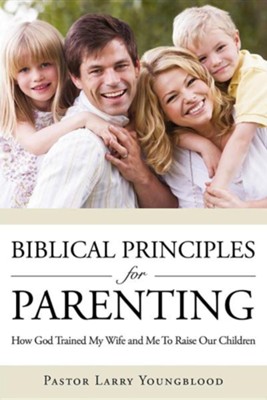 ▼▲
Pastor Larry and Margaret Youngblood were married April 23, 1961, and have been blessed with six children (four sons and two daughters) and sixteen grandchildren, all of whom are serving the Lord in Bible-believing churches.Saved by the grace of God in October 1965 and called to preach in February 1969, Pastor Youngblood began pastoring in November 1969 at Southside Baptist Church in Warner Robins, Georgia. He then pastored Westside Baptist Church in Jackson, Georgia, and is now at Calvary Baptist Church in Auburn/Carl, Georgia, where he has pastored for more than 34 years. He also graduated from Gwinnett Hall Baptist College in Lawrenceville, Georgia, where he teaches as a guest professor in Biblical studies.Motivated to action by the brutal, unending assault of our modern culture on the Christian family, Pastor Youngblood has tailored his pastoral ministry toward helping people find God's answers to seemingly insurmountable family problems.The heart of the author is revealed as he shares his desire that your family become a showcase of God's grace as you claim the promises of God through the Biblical principles given to us in the Scripture.

▼▲
I'm the author/artist and I want to review Biblical Principles for Parenting.
Back