Skip to main content
SPRING CYBER EVENT STARTS NOW: And it's a really BIG deal! Up to 88% off through 5/24>
Big Idea of Biblical Preaching, The: Connecting the Bible to People - eBook
By: Keith Willhite, Scott M. Gibson
Stock No: WW38161EB 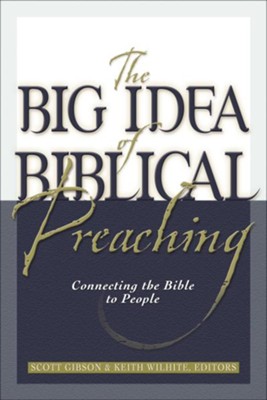 Big Idea of Biblical Preaching, The: Connecting the Bible to People - eBook

▼▲
Since 1980, Haddon Robinson has influenced generations of students and preachers through his widely used classic text, Biblical Preaching, in which he shows preachers how to communicate the Bible's big ideas with precision. But does Robinson's "big idea" approach to expository preaching still work in today's diverse cultures and fast-paced world?
The Big Idea of Biblical Preaching, now in paperback, presents a strong defense of the ongoing relevance of this approach to expository preaching. An experienced and skilled group of contributors to this volume includes: Paul Borden, Scott M. Gibson, Duane Litfin, Terry Mattingly, John Reed, Bruce L. Shelley, Donald R. Sunukjian, Joseph M. Stowell III, Bruce K. Waltke, Scott Wenig, and Keith Willhite.
This volume is written not only for the current generation of students but also for today's preachers, who will find in the pages of this book a powerful approach to expository preaching.

▼▲
Keith Willhite, Th.M., Ph.D., is associate professor of pastoral ministries and director of D.Min. studies at Dallas Theological Seminary, Texas. He has ten years of pastoral experience in churches in Texas, Indiana, and Michigan.

Scott M. Gibson (D.Phil., Oxford) is the Haddon W. Robinson Professor of Preaching and Ministry and Director of the Center for Preaching at Gordon-Conwell Theological Seminary and one of the founders of the Evangelical Homiletics Society.

▼▲
I'm the author/artist and I want to review Big Idea of Biblical Preaching, The: Connecting the Bible to People - eBook.
Back
Back