Skip to main content
SPRING CYBER EVENT STARTS NOW: And it's a really BIG deal! Up to 88% off through 5/24>
The 25 Biblical Laws of Partnership with God: Powerful Principles for Success in Life and Work - eBook
By: William Douglas, Rubens Teixeira
Stock No: WW103956EB 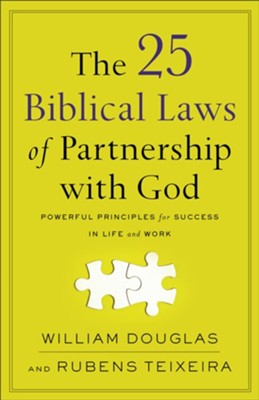 The 25 Biblical Laws of Partnership with God: Powerful Principles for Success in Life and Work - eBook

▼▲
Have you ever imagined what it would be like to enter into a business partnership with God? In The 25 Biblical Laws of Partnership with God, William Douglas and Rubens Teixeira reveal that God wants to be a part of not just your spiritual life but your entire life. God wants to participate in your career, your workplace, and the way you do business. The 25 biblical laws offer a spiritual agenda with practical results, providing answers to such questions as

- How should a Christian act at work?
- If the owner of a company is a follower of the Bible, how should they treat their employees and clients?
- Should the products sold or the services rendered by a partner of God be special in any way?

▼▲
William Douglas is a federal judge in Rio de Janeiro, Brazil, a university professor, a popular speaker, and the author of 35 books, including the Brazilian edition of The 25 Biblical Laws of Success, with over 250,000 copies sold. He is part of Educafro, a Brazilian organization working to prevent racial prejudice and promote equal opportunities, and is the entrepreneurship coordinator for social projects for United Missions, part of the Brazilian Baptist Convention. He is also part of the Brazilian Evangelical Academy of Writers.

Rubens Teixeira is former CFO of Petrobras Transporte S.A. (Transpetro) and an analyst for Central Bank of Brazil, as well as a professor, writer, and frequent panelist. He was honored with the National Treasure Prize for his PhD thesis with proposals for the Brazilian economy and is the author of How to Succeed When You Are Not the Favorite. He holds degrees in civil engineering, nuclear engineering, law, and military science. He is also part of the Brazilian Evangelical Academy of Writers.

▼▲
I'm the author/artist and I want to review The 25 Biblical Laws of Partnership with God: Powerful Principles for Success in Life and Work - eBook.
Back
Back