Skip to main content
SPRING CYBER EVENT STARTS NOW: And it's a really BIG deal! Up to 88% off through 5/24>
Biblical & Near Eastern Essays
By: Carmel McCarthy, John F. Healey
Stock No: WW466900 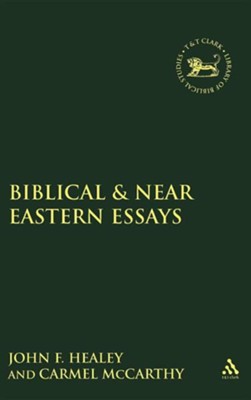 This collection of essays contains a wide range of topics reflecting the depth and breadth of interest of the scholar in whose honour they were commissioned - Kevin J. Cathcart.

The central focus is Near Eastern, and covers a range of philological, linguistic, exegetical, historical and interpretative issues. The Near Eastern languages examined include Akkadian, Arabic, Aramaic, Ethiopic, Hebrew, Septuagintal Greek, Syriac and Ugaritic, while exegetical and text-critical topics include treatments of issues in Deuteronomy, 1 Kings, Isaiah, Amos, Psalms and the Song of Songs. Hermeneutical and historical essays touch on Ancient Israel's history and its interpretation, as well as on the significance of such individuals as the consular official John Dickson, E.H. Palmer in the Cambridge Libraries, William Lithgow of Lanark, and the contribution to Semitic epigraphy of the explorer Julius Euting.

This is volume 375 in the Journal for the Study of the Old Testament Supplement series.

▼▲
I'm the author/artist and I want to review Biblical & Near Eastern Essays.
Back