We are OPEN and SHIPPING - click here for shipping estimates
The Origins of Biblical Monotheism: Israel's Polytheistic Background and the Ugaritic Texts
By: Mark S. Smith 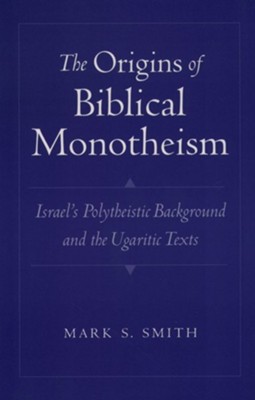 The Origins of Biblical Monotheism: Israel's Polytheistic Background and the Ugaritic Texts

▼▲
According to the Bible, ancient Israel's neighbors worshipped a wide variety of gods. In recent years, scholars have sought a better understanding of this early polytheistic milieu and its relation to Yahweh, the God of Israel. Drawing on ancient Ugaritic texts and looking closely at Ugaritic deities, Mark Smith examines the meaning of "divinity" in the ancient near East and considers how this concept applies to Yahweh.

▼▲
Mark S. Smith is Skirball Professor of Bible and Ancient Near Eastern Studies at New York University. His publications include The Pilgrimage Pattern in Exodus (1997), The Ugaritic Baal Cycle (1994), The Early History of God (1990), as well as several other books on the Hebrew Bible, the Dead Sea Scrolls, and West Semitic mythology and literature.

▼▲
I'm the author/artist and I want to review The Origins of Biblical Monotheism: Israel's Polytheistic Background and the Ugaritic Texts.
Back
×