Skip to main content
Get Christmas Ready Sale — Over 1,000 deals thru 9/26!
Biblical Literacy: The Most Important People, Events, and Ideas of the Hebrew Bible - eBook
By: Rabbi Joseph Telushkin
Stock No: WW70428EB 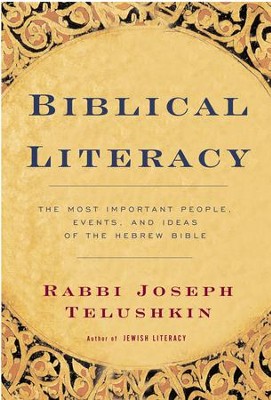 Biblical Literacy: The Most Important People, Events, and Ideas of the Hebrew Bible - eBook

As he did so brilliantly in his bestselling book, jewish literacy,Joseph Teluslikin once again mines a subject of, Jewish history and religion so richly that his book becomes an inspiring companion and a fundamental reference. In Biblical Lileracy, Telushkin turns his attention to the Hebrew Bible (also known as the Old Testament), the most iniluential series of books in human history. Along with the Ten Commandments, the Bible's most famous document, no piece of legislation ever enacted has influenced human behavior as much as the biblical injunction to "Love your neighbor as yourself." No political tract has motivated human beings in so many diverse societies to fight for political freedom as the Exodus story of God's liberation of the Israelite slaves--which shows that God intends that, ultimately, people be free.

The Bible's influence, however, has conveyed as much through its narratives as its laws. Its timeless and moving tales about the human condition and man's relationship to God have long shaped Jewish and Christian notions of morality, and continue to stir the conscience and imagination of believers and skeptics alike.

There is a universality in biblical stories:

The murder of Abel by his brother Cain is a profound tragedy of sibling jealousy and family love gone awry (see pages 11-14).

Abraham',s challenge to God to save the lives of the evil people of Sodom is a fierce drama of man in confrontation with God, suggesting the human right to contend with the Almighty when it is feared He is acting unjustly (see pages 32-34).

Jacob's, deception of his blind father, Isaac raises the timeless question: Do the ends justify the means when the fate of the world is at stake (see pages 46-55).

Encyclopedia in scope, but dynamic and original in its observations and organization, Biblical Lileracy makes available in one volume the Bible's timeless stories of love, deceit, and the human condition; its most important laws and ideas; and an annotated listing of all 613 laws of the Torah for both layman and professional, there is no other reference work or interpretation of the Bible quite like this Stunning volume.

Joseph Telushkin is a rabbi, scholar, and bestselling author of eighteen books, among them A Code of Jewish Ethics and Words That Hurt, Words That Heal. His book Jewish Literacy is the widest-selling work on the topic of Judaism. He lives with his wife, Dvorah, in New York City, and lectures regularly throughout the United States.

▼▲
I'm the author/artist and I want to review Biblical Literacy: The Most Important People, Events, and Ideas of the Hebrew Bible - eBook.
Back
Back