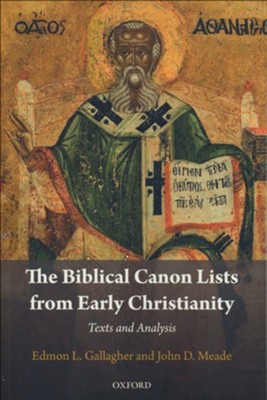 The Biblical Canon Lists from Early Christianity: Texts and Analysis

The Bible took shape over the course of centuries, and today Christian groups continue to disagree over details of its contents. The differences among these groups typically involve the Old Testament, as they mostly accept the same 27-book New Testament. An essential avenue for understanding the development of the Bible are the many early lists of canonical books drawn up by Christians and, occasionally, Jews. Despite the importance of these early lists of books, they have remained relatively inaccessible. This comprehensive volume redresses this unfortunate situation by presenting the early Christian canon lists all together in a single volume. The canon lists, in most cases, unambiguously report what the compilers of the lists considered to belong to the biblical canon. For this reason they bear an undeniable importance in the history of the Bible.

The Biblical Canon Lists from Early Christianity provides an accessible presentation of these early canon lists. With a focus on the first four centuries, the volume supplies the full text of the canon lists in English translation alongside the original text, usually Greek or Latin, occasionally Hebrew or Syriac. Edmon L. Gallagher and John D. Meade orient readers to each list with brief introductions and helpful notes, and they point readers to the most significant scholarly discussions. The book begins with a substantial overview of the history of the biblical canon, and an entire chapter is devoted to the evidence of biblical manuscripts from the first millennium. This authoritative work is an indispensable guide for students and scholars of biblical studies and church history.

Edmon L. Gallagher is Associate Professor of Christian Scripture at Heritage Christian University in Florence, Alabama. He is the author of Hebrew Scripture in Patristic Biblical Theory (Brill, 2012).

▼▲
"The authors provide a helpful source book on one significant aspect of the nature and development of the ancient Christian canon of Scripture that will be of use in discussing issues of New Testament introduction and in examining the role of apocryphal writings in ancient Christianity." -- C.
Stenschke, Ephemerides Theologicae Lovanienses
"The primary virtue of the book is that it brings together in one volume essentially all the canon lists and relevant commentary from the primary and secondary literature. The volume will be a boon to those who research or teach on the biblical canon, and the book will save its users significant
time in locating the standard information in the field" -- Jonathan J. Armstrong, The Moody Bible Institute of Chicago, De Gruyter
"Further work on the biblical canon from these two scholars is a desideratum. Their focus on a neglected element of canon studies could be usefully placed into a more general introduction to the canon debate. Such work could help students and scholars assimilate late their research into the broader
discussion of the biblical canon. That they have produced such a useful work on one element of the canon debate bate, suggests that they may have more to contribute to the field of canon studies." -- Robb Coleman, Southeastern Theological Review
"Gallagher and Meade supply commentary on the canon lists to assist the reader's engagement with the primary sources, but their chief aim is that readers would study the lists themselves and process their own questions about the history of the biblical canon in conversation with the ancient church.
It is the contention of this reviewer that they accomplished their goal ... The extensive analytical footnotes merit a final commendation of BCLEC. These footnotes comment on the text and translation of the canon lists and offer extensive secondary literature on the canon list under discussion. They
frequently present a range of interpretive options and exercise caution where caution is due." -- Robb Coleman, Southeastern Theological Review
"will be a useful resource for readers who wish to engage academically with how the Christian Bible came to take the forms in which it is found today." -- Andrew Gregory, Anvil
"Gallagher and Meade have provided a useful and much-needed tool in the study of the biblical canon. No doubt it will be a key resource for anyone wishing to explore the reception history of either the Old or New Testament." --Michael Kruger, Journal of Theological Studies
"[Gallagher and Meade] have produced what I think may well remain the standard volume on canon lists that scholars and students alike will appreciate for years to come. I heartily recommend this impressive volume." --Lee Martin McDonald, Review of Biblical Literature
"[T]his book is a valuable compendium of sources and summaries of scholarship pertaining to the history of the formation of the biblical canons... [A] valuable reference to students and researchers at all levels." --J. Edward Walters, Reading Religion
"Readers interested in the history of the Christian canon will find a helpful resource in this single-volume compilation of the biblical canon lists from the first four Christian centuries... This is an excellent and detailed compilation of primary sources for the study of the Christian canon." --
John R. Barker, The Bible Today
"The Biblical Canon Lists from Early Christianity is a unique, well-written, and clearly presented volume that provides both students and scholars with a valuable resource for the study of the canonical history of the biblical writings. Gallagher and Meade are to be commended for producing a
definitive and up-to-date study of the early canon lists in an accessible format." -- Benjamin Laird, Journal of the Evangelical Theological Society

▼▲
I'm the author/artist and I want to review The Biblical Canon Lists from Early Christianity: Texts and Analysis.
Back