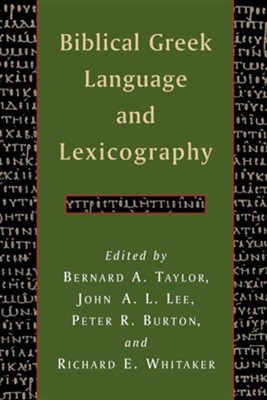 ▼▲
Frederick W. Danker is deservedly recognized as one of today's foremost Greek lexicographers. Unique among contemporary biblical scholars, Danker has lived to see the publication of two major Greek dictionaries that he himself edited. While he was part of the editorial team that produced the second edition of A Greek-English Lexicon of the New Testament and Other Early Christian Literature, he alone thoroughly revised the entire dictionary to produce the third edition, popularly known as BDAG. Projects like these have considerably advanced New Testament lexicography in the twentieth century and have laid a solid foundation for further lexicographical work in the twenty-first. Biblical Greek Language and Lexicography celebrates the life and work of Professor Danker. In character with his contribution to Greek scholarship, the essays have been chosen to assist biblical Greek students and their teachers to develop a deeper understanding of aspects of Greek language and lexicography. Among the topics of discussion are the way one discovers the meaning of words, current tools available to students of language, and the approach being used in the latest New Testament and Septuagint Greek dictionaries. The book also features rich footnotes directing students to important Greek language resources, a selected bibliography of Danker's publications, an appendix listing BDAG precursors, and four indexes - biblical references, Greek words, Hebrew forms, and grammatical and lexicographical terms. Sure to interest scholars, teachers, pastors, and students, this volume is both a worthy tribute to the career of Frederick Danker and a valuable presentation of the state of the art in Greek and biblicallanguage studies. Contributors: Rykle Borger Cameron Boyd-Taylor Peter R. Burton Randall Buth Frederick William Danker John H. Elliott Trevor V. Evans Erik Eynikel Katrin Hauspie William A. Johnson John A. L. Lee Barclay M. Newman Jr. Takamitsu Muraoka Stanley E. Porter Terry Roberts Bernard A. Taylor James W. Voelz Richard E. Whitaker

▼▲
David E. Aune
— University of Notre Dame
"This collection of essays in honor of Fred Danker, the nestor of New Testament Greek lexicographers, consists of some of the most important and informative discussions of New Testament lexicography currently available between two covers. The book is a well-deserved celebration of Danker's achievement in radically reworking and correcting some of the deficiencies and egregious errors of the Bauer-Aland lexicon and transforming that work into the linguistically progressive, user-friendly Bauer-Danker-Arndt-Gingrich New Testament Greek lexicon."

Bruce M. Metzger
— Princeton Theological Seminary
"Everyone who has an interest in biblical Greek will learn much from this collection of essays dealing with a wide variety of lexicographic topics. The volume is an altogether fitting tribute to the career of Frederick Danker, to whose learning and industry all of us are deeply indebted."

▼▲
I'm the author/artist and I want to review Biblical Greek Language and Lexicography: Essays in Honor of Frederick W. Danker.
Back