Skip to main content
SPRING CYBER EVENT STARTS NOW: And it's a really BIG deal! Up to 88% off through 5/24>
History of Biblical Interpretation, Volume 2: The Medieval Through the Reformation Periods
Edited By: Alan J. Hauser, Duane F. Watson
Stock No: WW878229 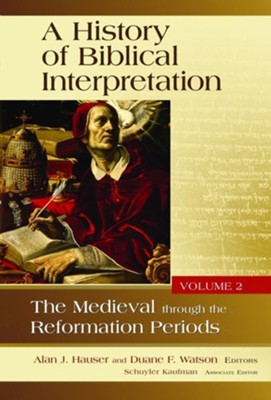 History of Biblical Interpretation, Volume 2: The Medieval Through the Reformation Periods

A History of Biblical Interpretation provides detailed and extensive studies of the interpretation of the Scriptures by Jewish and Christian writers throughout the ages. Written by internationally renowned scholars, this multivolume work comprehensively treats the many different methods of interpretation, the many important interpreters from various eras, and the many key issues that have surfaced repeatedly over the long course of biblical interpretation.

This second installment contains essays by fifteen noted scholars discussing major methods, movements, and interpreters in the Jewish and Christian communities from the beginning of the Middle Ages until the end of the sixteenth-century Reformation.

▼▲
Alan J. Hauser is professor of biblical studies at Appalachian State University, Boone, North Carolina. He is also coeditor of Art and Meaning: Rhetoric in Biblical Literature and coauthor of From Carmel to Horeb: Elijah in Crisis and Rhetorical Criticism of the Bible: A Comprehensive Bibliography with Notes on History and Method."

Duane F. Watson is professor of New Testament studies at Malone University, Canton, Ohio. He is also the author of Invention, Arrangement, and Style: Rhetorical Criticism of Jude and 2 Peter, editor of Persuasive Artistry: Studies in New Testament Rhetoric, and coauthor of Rhetorical Criticism of the Bible: A Comprehensive Bibliography with Notes on History and Method."

▼▲
I'm the author/artist and I want to review History of Biblical Interpretation, Volume 2: The Medieval Through the Reformation Periods.
Back