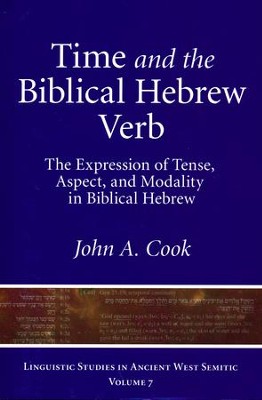 The Biblical Hebrew verb system continues to exercise scholars, and in Time and the Biblical Hebrew Verb, John Cook forwards an objective study that interacts with the range of approaches to the perennial questions of the Hebrew verb. Though many answers may appear deceptively traditional, Cook's approach is distinguished from the traditional approaches by its modern linguistic foundation. One distinguishing sign is his employment of the phrase "aspect prominent" to describe the Biblical Hebrew verbal system. As with almost any of the world's verbal systems, this aspect-prominent system can express a wide range of aspectual, tensed, and modal meanings.

Methodologically, Cook eschews statistical means of validation, pointing out their weaknesses along the way, and draws on diachronic typology and grammaticalization as an "external" means of validating his theory of the Biblical Hebrew verbal system. These fields have provided a wealth of data on verbal systems and diachronic changes to these systems in the world's languages. For any theory to be valid, it should accord generally with what is known about verbal systems and the ways that they tend to change over time.

Cook frames his discussion not with the traditional question of "Tense or Aspect?" but with the question "What is the range of meaning for a given form, and what sort of contextual factors (syntagm, discourse, etc.) help us to understand this range in relation to a general meaning for the form?" Fittingly, his account of this theory of discourse modes ends on an exegetical note with an explication of the interaction of verbs and their discourse context in two passages from the Hebrew Bible.

Cook's brilliant work addresses old questions with a fresh approach that is sure to provoke dialogue and new research.

▼▲
I'm the author/artist and I want to review Time and the Biblical Hebrew Verb: The Expression of Tense, Aspect, and Modality in Biblical Hebrew.
Back
×
Back
×