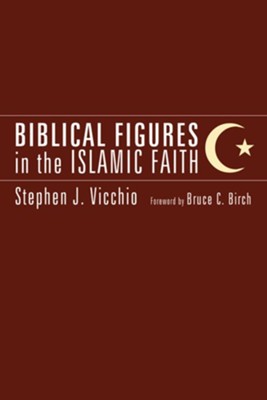 ▼▲
"Vicchio believes that by understanding how much Muslim tradition overlaps with the biblical traditions of Judaism and Christianity, we might begin to expose a wedge of common ground on which understanding and respect might begin to be built. "Vicchio begins with a brief introduction sketching some fundamentals of Muslim history and culture, and clearing away some common misconceptions. His main goal, however, is to give us a detailed look at the treatment of biblical figures in the literature of Islam. The broad range of his research and presentation is startling. He begins with the Qur'an but continues on to the collected writing of the roughly two hundred years after Mohammed (Hadith, Sunnah, Akhbar) that came to be regarded as authoritative in the various traditions that developed in early Islam. He then traces the interest in these biblical figures on into modern treatments of the role of these figures in Muslim scholarship and how these figures are understood and used in the traditions of Islam yet today. "The result of Vicchio's scholarship and presentation will be a revelation to most Christian and Jewish readers. It has become somewhat commonplace to refer to Judaism, Christianity, and Islam as the three Abrahamic faiths. This shows a beginning awareness of the beginnings of each of these three great religions, birthed in the Middle East, in a common ancestor, Abraham (Ibrahim). Abraham's faithfulness and his closeness to God make his a revered figure in each of these three great faiths, and for each Abraham is a beginning of the story of the particular relationship between God and the people of each of these religions." --from the Foreword

▼▲
Stephen J. Vicchio is Professor of Philosophy at College of Notre Dame of Maryland. He is also the author of The Voice from the Whirlwind and the Image of the Biblical Job (3 vols.).

▼▲
I'm the author/artist and I want to review Biblical Figures in the Islamic Faith - eBook.
Back
Back