We are OPEN and SHIPPING - click here for shipping estimates
PRE-SUMMER CYBER SALE: Shop over 2,500 items up to 90% off through 5/26 >
Biblical End Times & Biblical Prophecies 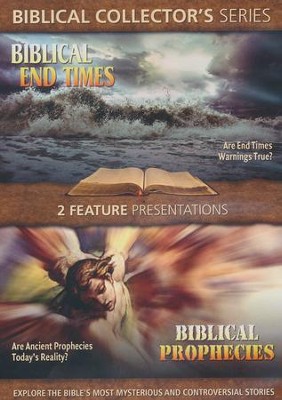 Biblical End Times - For thousands of years the Bible has warned of a vast array of cataclysmic disaster and an apocalypse that will destroy most of the world in fulfillment of End Time prophecy. The prophet Daniel warned that in the last days, there would be a time of trouble such as never before. Were the tragic events of September 11th the realization of that prophecy? Is it possible that the ancient foresaw the wars, natural disasters and strife of the 21st Century? And what about the prophecies of others, such as Nostradamus and Father Malachi O’Morgain? Are End Time warnings just stories from the ancient past…or do they depict a grim view of our immediate future?

Biblical Prophecies - Did biblical prophets have special abilities that allowed them to foretell the future? For thousands of years, history has received the words of prophets – men and women who seem to have uncanny insight into events of the future. For most of us, the notion of predicting the future seems inconceivable. Yet, according to the ancient prophets, there are portents of doom facing the nations of the Earth…times of famine, war, misery and cataclysmic natural disasters. Could it be these prophets were witnesses to our generation?

▼▲
I'm the author/artist and I want to review Biblical End Times & Biblical Prophecies.
Back
×
Back
×