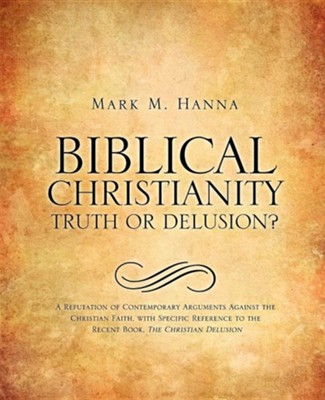 ▼▲
According to recent polls, the number of atheists and agnostics has more than doubled in the United States in the last twenty years. A coterie of their intellectual spokesmen have mounted a multifaceted attack on the Christian faith in a book entitled The Christian Delusion, which the atheist philosopher, Michael Martin, described as "arguably the best critique of the Christian faith the world has ever known." Dr. Hanna dismantles their arguments one by one, not only clearly exposing the fallaciousness of their contentions but also indicating how their failed case carries implications that furnish positive support for biblical Christianity. This book is more than a set of refutations; it provides a wide-ranging theological and philosophical purview that both biblical theists and anti-Christians need to take seriously, not only in order to understand the current debates but also to reflect on crucial issues relevant to one's own life and destiny. ___________________________________________________________Mark M. Hanna, now devoting full time to writing, was a professor of philosophy for many years at California State University and Talbot School of Theology. He also taught at the University of Southern California, where he earned M.A. degrees in philosophy and world religions and a Ph.D. in philosophy. He lived in the Middle East for four years, earning his B.A. at the American University in Beirut. He has lectured in numerous universities and theological schools around the world. He is the author of Crucial Questions in Apologetics and The True Path: Seven Muslims Make Their Greatest Discovery.*"This is masterly and brilliant...." --Norman L. Geisler, Ph.D."A devastating critique of the critics...." --Gary R. Habermas, Ph.D."A stunning achievement...It is a model of irenic, tough-minded, well-informed argumentation...." --J. P. Moreland, Ph.D."Give this book a careful reading ...." -- Dallas Willard, Ph.D

▼▲
I'm the author/artist and I want to review Biblical Christianity: Truth or Delusion?.
Back