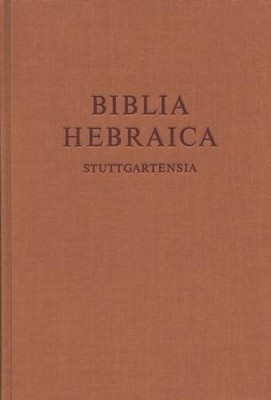 Included is a foreword in German, English, French, Spanish and Latin as well as an English and German key to the Latin words, abbreviations and other symbols in the critical apparatus.

Biblia Hebraica Stuttgartensia (BHS) Standard Edition features a larger size, bigger margins, a ribbon marker, and a generally more spacious appearance, making it particularly accessible to the student engaged in intense language study. All of the unique features of the text, including margin notes and footnotes, are broadly displayed and easy on the eyes.

No, this book does include the footnote and extra markings in the text.

▼▲
I'm the author/artist and I want to review Biblia Hebraica Stuttgartensia (BHS) Standard Edition.
Back
Back