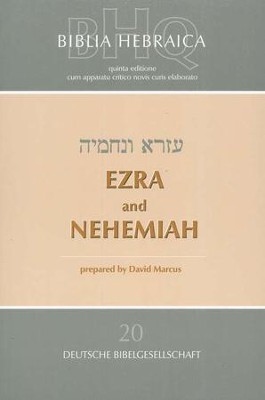 Biblia Hebraica Quinta (BHQ) is a detailed and up-to-date presentation of the available evidence for the transmission of the text of the Hebrew Bible. It is being released book by book by the German Bible Society as the work on each one is finished. As with the previous critical edition of the Hebrew Bible, Biblical Hebraica Stuttgartensia, BHQ provides an excellent overview of the existing textual variants that are relevant for translation and exegesis. Much disparate material is brought together in this edition, which makes it a valuable resource for text critical scholars.

At the beginning of each volume, there is a table of accents, a glossary for the Masorah parva, a list of the definitions and abbreviations used to characterize the readings, and a useful sample page that illustrates the features of the layout. Each volume ends with a detailed yet succinct discussion of the textual witnesses for each biblical book that contains a wealth of helpful information, and the manuscripts and critical editions of the texts are clearly annotated. The volumes read right to left.

This is the new (fifth) edition of the Biblia Hebraica. It is being published in parts (fascicles).
Features include:
• Text of the Leningrad Codex, cited from new color photographs
• Masorah magna and parva of Leningrad Codex are included with the text
• A single apparatus with all relevant textual variants at bottom of the page
• Two other Tiberian codices are collated for each book
• Qumran and Judean Desert fragments are collated
• All available pre-Tiberian witnesses for each textual case are noted
• Each book is also accompanied by a commentary

BHQ Ezra Nehemiah:
--prepared by David Marcus
His volume represents a first in the history of the GBS editions, as he is the first Jewish scholar to have authored one of the books of the Bible under its auspices.

▼▲
"Biblia Hebraica Quinta (BHQ) , the successor of BHS, aims to contribute to a deeper insight into the history of its text, and thus to a better understanding of the text itself. It uses Codex Leningrad as the central text, presented on the upper half of the page, while the accompanying apparatus appears on the lower half.

"Each volume contains a large number of useful lists and tablets. At the beginning of each volume, there is a table of accents, a glossary for the Masorah parva, a list of the definitions and abbreviations used to characterize the readings, and a very useful sample page that illustrates the features of the layout. The volume on the Megilloth further contains a general introduction that provides a brief overview of the various manuscripts used and a discussion of the manner in which they are used in the BHQ. The volumes read right to left. As a result, the English text of the general introduction, as well as that of the ensuing tables and lists, reads backwards.

"Each volume ends with a detailed discussion of the textual witnesses of each biblical book. This discussion is a wealth of information. The layout is succinct and the used manuscripts and critical editions of texts are clearly annotated. In addition, it reads left to right which facilitates the reading.

"The section `Hebrew Witnesses'' begins with an analysis of the various manuscripts belonging to the Masoretic reading tradition. This discussion is a wealth of information. The layout is succinct and the used manuscripts and critical editions of texts are clearly annotated. In addition, it reads left to right which facilitates the reading. It opens with an overview on Codes Leningrad, and discusses the state of the Hebrew text, whether it has been transmitted reliably or whether it has suffered any damage, the cases of ketib and qere, the occurrences of petuchot and setumot, etc. It also contains a lengthy discussion of the Masoretic notations (Masorah parva, Masorah magna, and Masorah finales--notes relating to the number of occurrences of certain spellings or vocalization, and of certain words/phrases, as well as information about the shortest verse, the middle verse and the total number of verses of a book): of their character, placement on the page, and to what extent the information they convey corresponds to the content and appearance of the actual manuscript.

"The section continues with an analysis of other important Hebrew manuscripts belonging in the Masoretic tradition, and how they differ from Codex Leningrad. This section also contains a discussion of the various manuscripts from Qumran, where they exist, with focus on the orthographic and grammatical variants in relation to the Codex Leningrad. Lastly, in cases when applicable, there is a discussion of inner-biblical textual variations. In the case of Ezra-Nehemiah, for example, there is a short discussion of the textual relation of the parallel texts of Ezra 1:1-3:1 and Nehemiah 7:6-8:1, and of Ezra 1:1-3a and 2 Chronicles 36:22-23.

"Turning to the Greek witnesses, the book discusses the textual relationship between the Masoretic tradition and the Old Greek text, and the specific characteristics of the latter in terms of its translation. It notes, for example, whether it transliterates classes of people or place names which are otherwise capable of translation. Furthermore, when relevant, this section deals with the subsequent recensions of the Old Greek, in particular with the Lucianic recension, and with the Hexaplaric evidence. In the specific case of Ezra-Nehemiah, there is also a brief examination of the relationship between the books Ezra-Nehemiah and the Greek text of Esdras, and lists a brief bibliography. Likewise, in the case of Esther, there is a concise analysis with accompanying bibliography of the relationship between the Masoretic text and its two significant variants (the shorter A-text and the longer B-text).

"The following section deals with the Latin witnesses. Again, the character of the various translations is noted, as are the most important variants in relation to the Masoretic text. When applicable, both the Old Latin and the Vulgate are discussed. The Syriac and the Aramaic witnesses are treated in a similar fashion. The analysis of the evidence from the Peshitta is often rather brief, but it contains, when relevant, both the evidence from the Peshitta and from the Syro-Hexapla. The treatment of the Targummic evidence is likewise often on the short side, in part owing to its often midrashic (e.g. Ruth) or allegorical (e.g. Song of Songs) character which causes difficulties in discerning the actual Hebrew Vorlage. An exception is the exhaustive and well-annotated discussion of the Targumic evidence of the book of Esther. The introduction ends with a comprehensive bibliography of all the works cited.

"In conclusion, this is a detailed and up-to-date survey of the various manuscripts with bearing upon the study of the text of the Hebrew Bible. As the older BHS, BHQ provides a good overview of the existing textual variants. In addition, the final detailed discussion of the textual witnesses is very useful as it covers much information of diverse kinds in one place."
--Expository Times

▼▲
I'm the author/artist and I want to review Biblia Hebraica Quinta: Ezra & Nehemiah.
Back
Back