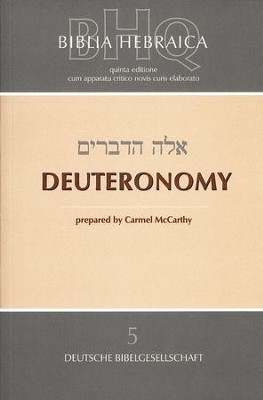 ▼▲
The Biblia Henraica Quinat (BHQ) is a detailed and up-to-date survey of the various manuscripts with bearing upon the study of the text of the Hebrew Bible. As the older BHS, BHQ provides a good overview of the existing textual variants. In addition, the final detailed discussion of the textual witnesses is very useful as it covers much information of diverse kinds in one place.Each volume contains a large number of useful lists and tablets. At the beginning of each volume, there is a table of accents, a glossary for the Masorah parva, a list of the definitions and abbreviations used to characterize the readings, and a very useful sample page that illustrates the features of the layout. The volume on the Megilloth further contains a general introduction that provides a brief overview of the various manuscripts used and a discussion of the manner in which they are used in the BHQ. The volumes read right to left. As a result, the English text of the general introduction, as well as that of the ensuing tables and lists, reads left to right.Each volume ends with a detailed discussion of the textual witnesses of each biblical book. This discussion is a wealth of information. The layout is succinct and the used manuscripts and critical editions of texts are clearly annotated. In addition, it reads left to right which facilitates the reading.This is the new (fifth) edition of the Biblia Hebraica. It is being published in parts (fascicles).Features include: Text of the Leningrad Codex, cited from new color photographs.

▼▲
This is the new (fifth) edition of the Biblia Hebraica. It is being published in parts (fascicles).
Features include:
• Text of the Leningrad Codex, cited from new color photographs
• Masorah magna and parva of Leningrad Codex are included with the text
• A single apparatus with all relevant textual variants at bottom of the page
• Two other Tiberian codices are collated for each book
• Qumran and Judean Desert fragments are collated
• All available pre-Tiberian witnesses for each textual case are noted
• Each book is also accompanied by a commentary

▼▲
I'm the author/artist and I want to review Biblia Hebraica Quinta: Deuteronomy.
Back
×
Back
×