We are OPEN and SHIPPING - click here for shipping estimates
Biblia Germanica
Translated By: Martin Luther 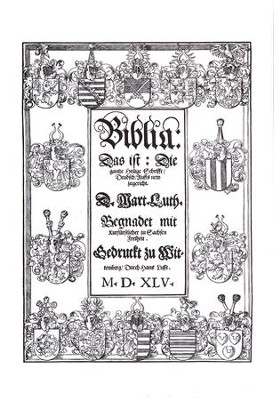 Hailed as a great gift to the German people, Martin Luther's 1545 Biblia Germanica had a profound impact on Germany's language, literature, and the growth of Protestantism. Over time other German translations appeared, and in the present we see an almost bewildering abundance of new translations, but the Luther Bible launched the progression of the German language. In addition, the Luther text set binding standards for dealing with the biblical word. The output is one column set, with the exception of the Psalter and the Proverbs of Solomon, which are in two columns. In celebration of the Reformation's 500th anniversary, this replica of the 1545 Biblia Germanica, of which only two originals are left, features Luther's text, notes, and headings, as well as numerous woodcuts based on biblical stories.

Martin Luther (1483-1546) was a German monk, priest, professor, theologian, and church reformer whose teachings inspired the Reformation and deeply influenced not only the doctrines and culture of the Lutheran and Protestant traditions but also the course of Western civilization.

▼▲
I'm the author/artist and I want to review Biblia Germanica.
Back
×
Back
×