Skip to main content
Men of the Bible: A One-Year Devotional Study of Men in Scripture - eBook
By: Ann Spangler, Robert Wolgemuth
Stock No: WW3646EB 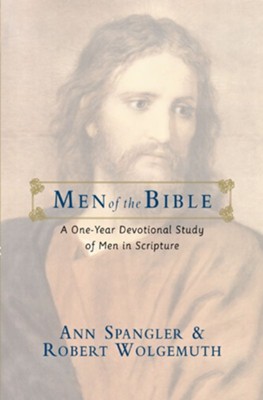 Men of the Bible: A One-Year Devotional Study of Men in Scripture - eBook

▼▲
Make Bible reading a daily habit with the help found in Men of the Bible: A One-Year Devotional Study of Men in Scripture. This book focuses on the lives of fifty-two men in Scripture whose stories often mirror our own. The devotional offers five elements: inspiration, application, Bible study, Bible promises, and prayer. Each week focuses on one man's life with five days of reading and reflection. Paperback.

Men of the Bible offers both men and women a fresh way to read and understand the Bible--through the eyes and hearts of the men whose stories unfold in its pages.

This unique book takes a close-up look at fifty-two men in Scripture--complex flesh-and-blood characters whose strengths and weaknesses will seem strangely similar to your own. Heroes and villains, sinners and prophets, commoners and kings--their dramatic life stories provide you with a fresh perspective on the unfolding story of redemption.

Though our culture differs vastly from theirs, the fundamental issues we face in relation to God and the world remain the same. We still reach for great dreams and selfish ambitions. We wrestle with fear and indecision, struggle with sexual temptation, and experience the ache of loneliness and the devastation of betrayal. And, like many of these men, we long to walk more closely with the God who calls us into an intimate relationship with himself and who enables us to fulfill his purpose for our lives.

Men of the Bible offers men and women today a unique devotional experience that combines five elements. Each week becomes a personal retreat focused on the life of a particular man:

Designed for personal prayer and study or for use in small groups, Men of the Bible will help you make Bible reading a daily habit. Whether you dip into portions or read every page, this book will help you grow in character, wisdom, and obedience as a person after God's own heart.

Ann Spangler is an award-winning writer and the author of many bestselling books, including Praying the Names of God, Women of the Bible and Sitting at the Feet of Rabbi Jesus. She is also the author of The One Year Devotions for Women and the general editor of the Names of God Bible. Ann’s fascination with and love of Scripture have resulted in books that have opened the Bible to a wide range of readers. She and her two daughters live in Grand Rapids, Michigan.

Robert Wolgemuth has been in the book publishing business for over forty years. A former president of Thomas Nelson Publishers, he is the founder of Wolgemuth & Associates, a literary agency representing the work of more than two hundred authors.

Robert is known as a relentless advocate for God's Word and a champion for the family, effective communication, leadership, listening skills, relationship building, and biblical truth.

A graduate of Taylor University, from which he received an honorary doctorate in May 2005, Robert has two grown daughters, two sons-in-law, five grandchildren, and one grandson-in-law. He and his wife, Nancy, live in Southwest Michigan.

▼▲
I'm the author/artist and I want to review Men of the Bible: A One-Year Devotional Study of Men in Scripture - eBook.
Back
Back