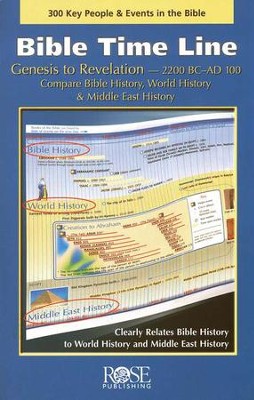 ▼▲
This Bible Time Line pamphlet shows hundreds of facts in biblical history. Includes dates of kings, prophets, battles, and key events. Compare Bible history, world history, and Middle East history side-by-side. Did you know that Buddha, Confucius, and the prophet Daniel all lived at the same time?, While the Sheng Dynasty was flourishing in China, Moses was leading the people out of Egypt during the Exodus?, The first recorded Olympic games in Greece were held at the time of Jonah?, The Greek historian Homer lived during the time of Isaiah, Amos, and Micah?, Mt. Vesuvius erupted and buried Pompeii during the apostle John'slifetime? Also includes colorful photos and illustrations. 10 pt. type makes it easy to read. Size 8.5" x 5.5". Fits in a Bible cover. Unfolds to 33" long.

Easily see over 300 key events from Genesis through Revelation at a glance—and conveniently compare Bible and world history side-by-side with this slimline pamphlet (fits inside most Bible covers)! Covering everyone from Adam and Abraham to Cleopatra and Aristotle, this fold-out, laminated time line provides key background information in a way few Bible resources can—showing over 2,000 years of history in a single glance. Quickly see the sequence of every major event in the Bible alongside fascinating facts from world history.

Since the Bible was written over thousands of years (and its books are not in chronological order), this time line is a convenient way to quickly see the "big picture" and context of the Bible!

This handy pamphlet is filled with full-color illustrations and photographs. There is no better time line of Bible history for Bible studies, church groups, Sunday schools, and small groups. 12 panels, fits inside most Bibles, 8.5 x 5.5 inches, unfolds to 33 inches long.

See 300 Key People and Events in Bible and World History At a Glance!

Gain a new perspective on the place and time of biblical history when you see the comparisons.

▼▲
I'm the author/artist and I want to review Bible Time Line Pamphlet.
Back
Back