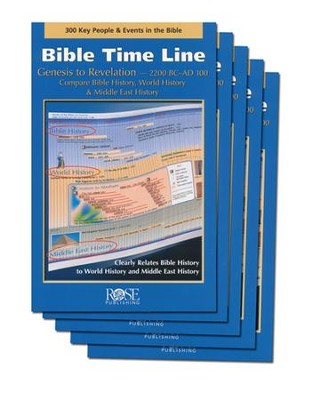 ▼▲
The Bible Time Line pamphlet clearly relates Bible history to world history and middle east history from Genesis to Revelation — 2200 BC to AD 100. Hundreds of key people, dates and events in the Bible are included with full-color illustrations and photographs.

Rose Pamphlets are 8½" x 5½", with 12 panels protected by a glossy coating, and easy to carry inside of your Bible, folder, or binder. Use for Individual study, Discipleship, Small Group or Sunday School class, Christian School, Homeschoolers, New Believers' class, and Church library.

▼▲
Bible Time Line See Genesis to Revelation at a glance. This pamphlet shows hundreds of dates in biblical history including all of the kings of Israel and Judah, rulers of Assyria, Babylonia, Egypt, and Rome, key events and people of Bible history, world history and Middle East history. Opens to 8 1/2" x 33."

Easily see over 300 key events from Genesis through Revelation at a glance—and conveniently compare Bible and world history side-by-side with this slimline pamphlet (fits inside most Bible covers)! Covering everyone from Adam and Abraham to Cleopatra and Aristotle, this fold-out, laminated time line provides key background information in a way few Bible resources can—showing over 2,000 years of history in a single glance. Quickly see the sequence of every major event in the Bible alongside fascinating facts from world history.

Since the Bible was written over thousands of years (and its books are not in chronological order), this time line is a convenient way to quickly see the "big picture" and context of the Bible!

This handy pamphlet is filled with full-color illustrations and photographs. There is no better time line of Bible history for Bible studies, church groups, Sunday schools, and small groups. 12 panels, fits inside most Bibles, 8.5 x 5.5 inches, unfolds to 33 inches long.

See 300 Key People and Events in Bible and World History At a Glance!

Gain a new perspective on the place and time of biblical history when you see the comparisons.

▼▲
I'm the author/artist and I want to review Bible Time Line Pamphlet - 5 Pack.
Back
Back