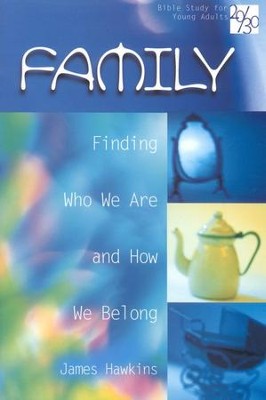 ▼▲
Family: Finding Who We Are and How We Belong will explore questions like What, exactly, is a family? Is it a married couple with 2.3 children, a dog, and a minivan? Couples without children? Single adults? Friends? Church groups? Colleagues? The notion of "family" encompasses these forms and more. In this study, you will discover how family is shaped and nurtured by our relationship with God, a relationship that encourages mutual growth in love of God, self, and neighbor through our interactions with those whom we identify as "family." This resource helps users explore their questions about family with insights, images, and stories from Scripture.

▼▲
James Hawkins is a pastor, currently serving in Smyrna, Delaware. A graduate of Northwestern University, Jims first career was in journalism. After a short and exciting stint as a reporter for a daily newspaper in Southern California, he responded to Gods calling him to pastoral ministry, a different kind of news business. He graduated from Wesley Theological Seminary and has served as a pastor in the Peninsula-Delaware Conference. In addition to his pastoral duties, Jim writes for FaithLink and is the author of Family: Finding Who We Are and How We Belong, a volume in the 20/30 Series for Young Adults. Jim is married to Kathleen, who is the executive director of The United Methodist Foundation in the Eastern Pennsylvania and Peninsula-Delaware conferences. In his free time, Jim loves music (particularly singing), cooking, eating Kathleens much better cooking, and traveling.

▼▲
I'm the author/artist and I want to review 20/30 Bible Study for Young Adults: Family.
Back
Back