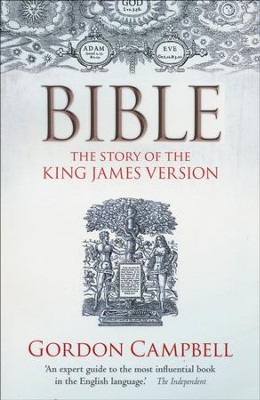 ▼▲
Though it would have surprised the original translators, the King James Bible is one of the most influential literary documents, and arguably, the most important religious document in the English speaking world.

Produced during the height of Shakespeare and Donne's careers, the King James Version of the Bible has long been revered for its eloquence and poetry, and as the most beautiful of all English translations. Now reaching its 400th anniversary, it remains a frequently used and controversial translation, especially in America a country whose religious conceptions have been shaped by the KJV since its inception.

This book, The Bible: The Story of the King James Version, 1611-2011 written by leading Renaissance literature authority Gordon Campbell, is a comprehensive history that tells the intriguing story of how the KJV Bible from its inception to its existence today as both a religious authority and literary masterpiece.

The story of course begins with King James himself, the commissioning of the work, the gathering of scholars who would produce it, and of course, the politics that lay behind the work of translation. The textual history of the Bible from the first edition in 1611 to the Oxford University Press edition published in 1769 and considered the modern standard, is traced and reveals a fascinating transmission process by subsequent generations who edited and interacted with the text through the 17th and 18th centuries. In the end, the editors only added fuel to controversies surrounding the KJV both in their day and our own.

The 19th and 20th century history the KJV is then presented and pays particular attention to the revision controversies in 19th century England, and the continuing impact of the Bible on the emerging American continent whose religious mind had been shaped by the KJV since its inception, and who continues to revere and read the KJV more than any nation in history. The American life of the KJV is, of course, the spring board for discussing the KJV in the modern world, and its relevance and place in a globalized society which Campbell discusses in the final chapter.

Finally, The Bible: The Story of the King James Version includes illustrations and appendices containing short biographies of the translators and a guide to the 74-page preliminaries of the 1611 edition.

▼▲
Produced during the lifetime of Shakespeare and Donne, the King James Version of the Bible has long been viewed as the most elegantly written and poetic of the many English translations. Now reaching its four hundredth anniversary, it remains one of the most frequently used Bibles in the English-speaking world, especially in America.

Lavishly illustrated with reproductions from early editions of the KJB, Bible: The Story of the King James Version offers a vivid and authoritative history of this renowned translation, ranging from the Bible's inception to the present day. Gordon Campbell, a leading authority on Renaissance literatures, tells the engaging and complex story of how this translation came to be commissioned, who the translators were, and how the translation was accomplished. Campbell does not end with the printing of that first edition, but also traces the textual history from 1611 to the establishment of the modern text by Oxford University Press in 1769, shedding light on the subsequent generations who edited and interacted with the text and bringing to life the controversies surrounding later revisions. In addition, the author examines the reception of the King James Version, showing how its popularity has shifted through time and territory, ranging from adulation to deprecation and attracting the
attention of a wide variety of adherents. Since the KJB is more widely read in America today than in any other country, Campbell pays particular attention to the history of the KJB in the United States. Finally, the volume includes appendices that contain short biographies of the translators and a guide to the 74-page preliminaries of the 1611 edition.

A fitting tribute to the enduring popularity of the King James Version, Bible offers an illuminating history of this most esteemed of biblical translations.

▼▲
Gordon Campbell is Professor of Renaissance Studies at Leicester University. An authority on Renaissance literature, he is the co-author of John Milton: Life, Work, and Thought (with Thomas N. Corns).

▼▲
Gordon Campbell's BIBLE received a review in the August 2011 issue of CHOICE, where the reviewer said, "All told, Campbell's flair for the interesting anecdote and careful painting of context makes this an informative, compelling biography for both scholars and general readers of the premiere English Bible."

". . . an informative, compelling, biography for both scholars and general readers of the premierer English Bible. . . Highly Recommended."--Choice
"...Campbell's flair for the interesting anecdote amd careful painting of context makes this an informative, compelling biography for both scholars and general readers of the premiere English Bible"--S. Young, McHenry Country College
"Campbell does a great job thoughout the book showing how the KJV is the most important book in the English. I highly recomment Bible, THe Story of the King James Version by Gordon Campbell from Oxford University Press."-- Randy A. Brown
"...KJV is the translation that is a building block of our collective cultural heritage."--Jon Sweeney
"Campell has set out to write a historically accurate and scholarly informaed account of the origins development, and reception of this most famous of English Bibles, and has succeeded admirably in that task."--Alister E. McGrath. Kings College London
"...intensely political story detailed so well by Norton and Campbell...."---Mark Noll, Books Culture
"Valuable and enlightening."--Interpretation: A Journal of Bible and Theology