The Bible with Sources Revealed: A New View into the Five Books of Moses
By: Richard Elliott Friedman 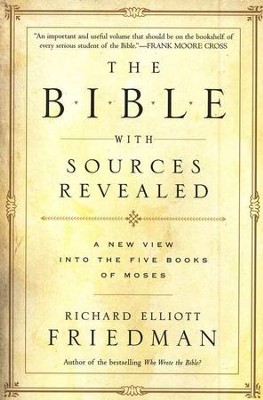 The Bible with Sources Revealed: A New View into the Five Books of Moses

▼▲
Richard Elliott Friedman offers a new , visual presentation of the Pentateuch that uses different colors and type styles to solve the puzzle of the Pentateuch's origins for the general reader. It also provides abundant evidence for establishing and explaining the "documentary hypothesis." Explores source-text artistry, views of God and man, and historic connections.

In The Bible with Sources Revealed, Richard Elliott Friedman offers a new, visual presentation of the Five Books of Moses -- Genesis, Exodus, Leviticus, Numbers, and Deuteronomy -- unlocking the complex and fascinating tapestry of their origins. Different colors and type styles allow readers to easily identify each of the distinct sources, showcasing Friedman's highly acclaimed and dynamic translation.

RICHARD ELLIOTT FRIEDMAN is one of the premier bible scholars in the country. He earned his doctorate at Harvard and was a visiting fellow at Oxford and Cambridge, a Senior Fellow of the American Schools of Oriental Research in Jerusalem, and a Visiting Professor at the University of Haifa. He is the Ann & Jay Davis Professor of Jewish Studies at the University of Georgia and the Katzin Professor of Jewish Civilization Emeritus of the University of California, San Diego. He is the author of Commentary on the Torah, The Disappearance of God, The Hidden Book in the Bible, The Bible with Sources Revealed, The Bible Now, The Exile and Biblical Narrative, the bestselling Who Wrote the Bible?, and most recently, The Exodus. He was an American Council of Learned Societies Fellow and was elected to membership in The Biblical Colloquium. His books have been translated into Hebrew, German, Italian, Spanish, Russian, Japanese, Polish, Hungarian, Dutch, Portuguese, Czech, Turkish, Korean, and French. He was a consultant for the Dreamworks film The Prince of Egypt, for Alice Hoffman's The Dovekeepers, and for NBC, A&E, PBS, and Nova.

▼▲
“An amazing work. It makes the theory of the Bible’s origins available to all in a clear and concise way.”
“Friedman’s The Bible with Sources Revealed is a paradigm of accessible scholarship of the highest order.”
“A fundamental resource for understanding what the Hebrew Bible is all about.”
“A succinct, lucid, detailed exposition and defense of the classic Documentary Hypothesis--a highly useful resource.”
“A volume indispensable for study in Biblical history. No one can really understand the Bible’s composition without consulting this work.”
“An important and useful volume which should be on the book shelf of every serious student of the Bible.”
“Very highly recommended.”

▼▲
I'm the author/artist and I want to review The Bible with Sources Revealed: A New View into the Five Books of Moses.
Back
×
Back
×