Skip to main content
SPRING CYBER EVENT STARTS NOW: And it's a really BIG deal! Up to 88% off through 5/24>
What's In the Bible: A Tour of Scripture from the Dust of Creation to the Glory of Revelation - eBook
By: R.C. Sproul, Robert Wolgemuth
Stock No: WW17323EB 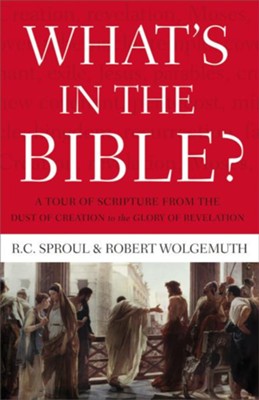 What's In the Bible: A Tour of Scripture from the Dust of Creation to the Glory of Revelation - eBook

A road map that will help you better comprehend the Bible as a whole. Sharpen your understanding and admiration for the most important book ever written--the most monumental story ever recorded.

Esteemed theologian R.C. Sproul and best-selling author Robert Wolgemuth collaborated to highlight the essence of God's voice, activity, and purpose throughout the Old and New Testaments in this understandable and readable introduction to the Bible.

Written from the perspective of a theologian and a layman, What's In the Bible is designed to welcome both newcomers and seasoned believers to the Bible by:

This revised and updated edition also includes a new topical index for ease of reference.

Dr. R.C. Sproul is the founder and chairman of Ligonier Ministries, an international Christian education ministry located near Orlando, Florida. His teaching can be heard on the program Renewing Your Mind, which is broadcast on hundreds of radio outlets in the United States and in 40 countries worldwide. He is the executive editor of Tabletalk magazine, general editor of The Reformation Study Bible, and the author of more than seventy books and scores of articles for national evangelical publications. Dr. Sproul also serves as president of Ligonier Academy of Biblical and Theological Studies, and Reformation Bible College in Sanford, Florida. He currently serves as senior minister of preaching and teaching at Saint Andrew's in Sanford, FL.

Robert Wolgemuth is the author of the bestselling book She Calls Me Daddy. He is also the author of many other titles including The Most Important Place on Earth, Seven Things You Better Have Nailed Down before All Hell Breaks Loose, and the sequel to his first book, She Still Calls Me Daddy. He has also co-written The Most Important Year in a Man’s Life with Mark DeVries, and What’s in the Bible with Dr. R. C. Sproul. Robert Wolgemuth has served two terms as the Chairman of the Evangelical Christian Publishers’ Association. Robert, a widower, is the father of two adult daughters and five grandchildren. In the fall of 2015, Robert married Nancy Leigh DeMoss.

▼▲
I'm the author/artist and I want to review What's In the Bible: A Tour of Scripture from the Dust of Creation to the Glory of Revelation - eBook.
Back
Back