Skip to main content
SPRING CYBER EVENT STARTS NOW: And it's a really BIG deal! Up to 88% off through 5/24>
What the Bible Says about Marriage, Divorce, and Remarriage
By: Robert Breaker
Stock No: WW040441 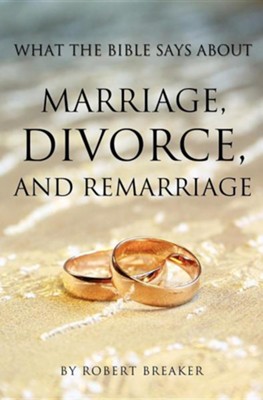 What the Bible Says about Marriage, Divorce, and Remarriage

▼▲
Robert Ray Breaker III is a King James Bible Believing Independent Baptist. His father led him to the Lord on July 29, 1992 in Milton, Florida.A few years later he enrolled in the Pensacola Bible Institute and graduated there in 1998 with a Bachelors of Divinity.While attending Bible School, Robert pastored, Garcon Point Baptist Church for a short time.Two weeks after graduation from Bible college, Robert went to Honduras, where he eventually became a Missionary for seven years on the field, planting several churches.Today Robert is a member of an Independent Baptist church in Monterrey, Mexico, and travels extensively throughout Central, South, and even North America fulfilling his God-called ministry as a Missionary Evangelist to the Spanish-speaking people.He also desires to reach his own English Speaking people in this day and age of apostasy, compelling them to return to the old time way, and stand firmly on the Biblical doctrines of salvation, sanctification, and the holy scriptures.Bro. Breaker also runs BREAKER PUBLICATIONS, a small printing ministry, focusing on printing good, sound, doctrinal works founded on the Scriptures, not on tradition.This is his work about WHAT THE BIBLE SAYS about Marriage, Divorce, and Remarriage. His other works can be found online at his website: www.rrb3.com

▼▲
I'm the author/artist and I want to review What the Bible Says about Marriage, Divorce, and Remarriage.
Back