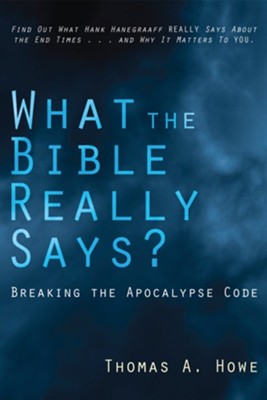 What the Bible Really Says?: Breaking the Apocalypse Code - eBook

▼▲
The study of the End Times has been a popular topic for many years, and there are many different positions that are proposed on how to understand the unfolding of God's program. The debate over the End Times has often been heated and has failed to showcase the best that Christian scholarship has to offer. It sometimes seems like everyone wants to get in on the action, and anyone who has an audience can (and has) put together his thoughts and made his opinions known through the printed page. Anyone can publish his views regardless of the level of competency in the original languages, his level of hermeneutic ability, or his understanding of history or theology. In his book The Apocalypse Code, Hank Hanegraaff declares that his goal is to "put hermeneutical tools into your hands so that you can draw from Scripture what God intends you to understand rather than uncritically accepting end-time models that may well be foreign to the text." It would be extremely helpful for someone to equip readers to be able to make their way through the maze of views. What the Bible Really Says? is a point-by-point analysis of the arguments of Hank Hanegraaff concerning end-times prophecy. This book is not an effort to promote one eschatological perspective over another. Rather it is an analysis of Hanegraaff's arguments and claims in order to discover whether or not he has succeeded in putting hermeneutical tools into the hands of his readers, or whether he has simply added his voice and his opinions to the cacophony of claims and counterclaims.

▼▲
Thomas A. Howe is Professor of Bible and Biblical Languages at Southern Evangelical Seminary in Charlotte, North Carolina, where he also directs the PhD program. He and his wife, Pat, have been married for over thirty years. They have three children and six grandchildren. Dr. Howe has published numerous articles and several books, including Objectivity in Biblical Interpretation and The Big Book of Bible Difficulties (with Norman L. Geisler).

▼▲
I'm the author/artist and I want to review What the Bible Really Says?: Breaking the Apocalypse Code - eBook.
Back
Back