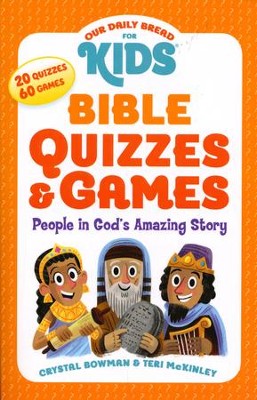 ▼▲
Encourage your kids to learn through play with the Our Daily Bread for Kids Bible Quizzes & Games. Designed for ages 6 to 10 years, this fun puzzle book features 20 quizzes and 60 games that help kids learn about and explore some key Bible characters.

▼▲
Bible Quizzes and Games: People in God’s Amazing Story is a fun way for 6–10-year-olds to explore some key Bible characters. Through this entertaining collection of crosswords, word searches, picture puzzles, and quizzes, children will learn about some of Scripture’s most important people.This 144-page book not only provides hours of fun and engaging activities to expand your child’s knowledge, but also enhances their cognitive skills.

▼▲
Crystal Bowman has sold over one million copies of her books internationally with five CBA bestsellers. A mother and grandmother who has penned over seventy-five books for children, she lives with her husband in Palm Beach Gardens, Florida.
Teri McKinley grew up in the world of publishing with her mother, Crystal Bowman, and is the coauthor of My Mama and Me—Rhyming Devotions for You and Your Child. She holds a master’s degree from Arizona State University and lives with her husband and son in east Texas.
Illustrator Luke Flowers spent countless childhood hours drawing sports heroes and comics at his grandfather’s drawing desk. His love of art led him to Rocky Mountain College of Art and Design, where he earned a BFA in illustration. After ten years working for Young Life’s creative services department, he launched Luke Flowers Creative, a company that seeks to "bring the illumination of imagination" to every project. Luke has won fourteen gold and silver Addy Awards for illustration and design.

▼▲
I'm the author/artist and I want to review Bible Quizzes & Games: People in God's Amazing Story.
Back
Back