We are OPEN and SHIPPING - click here for shipping estimates
PRE-SUMMER CYBER SALE EXTENDED thru 6/1 ~ Over 2,500 items up to 90% off
Bible Promises for God's Precious Princess
By: Jean Kavich Bloom
Illustrated By: Sheila Bailey 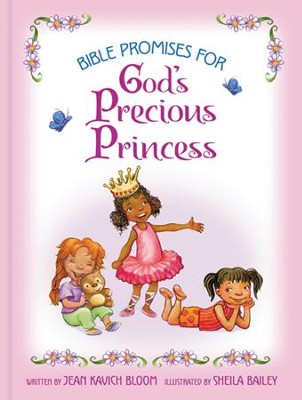 By: Jean Kavich Bloom
Illustrated By: Sheila Bailey
Zondervan / 2013 / Hardcover
Write a Review
Expected to ship on or about 06/20/20.
Email me when this product is available.
Stock No: WW723677

▼▲
Bible Promises for God's Precious Princess offers comfort and encouragement to every young girl. No matter what the situation, God's Word is sure to offer the reassurance that God is at our side, always ready and willing to give unquestioning love and protection.

Quote here: God has breathed life into all of Scripture. It is useful for teaching us what is true. 2 Timothy 3:16

The promises God makes in the Bible give us comfort and encouragement, and now you can help your precious princess apply them to her life! Each promise consists of short NIrV scripture references, reflections, and “You Can Do It” activities. A table of contents and index are included for easy reference.

Jean Kavich Bloom worked at Zondervan in Michigan for nearly twenty-four years, most recently as an Executive Managing Editor. Now a freelance writer and editor living in Indiana, she enjoys working at home and spending time with her family.

Sheila Bailey works in watercolor and digital media. In fact, it is this combination of tools that allows her to achieve her characteristic style. Sheila began her career as a designer and painter for Hallmark, Inc. Later, she became a featured designer at Will Vinton Studios. Formerly published under the name Sheila Lucas, Sheila Bailey has been writing and illustrating children's literature for more than a decade. Away from her brush, Sheila enjoys gardening and tending to her koi pond. She currently lives in Oregon.

▼▲
I'm the author/artist and I want to review Bible Promises for God's Precious Princess.
Back
×
Back
×