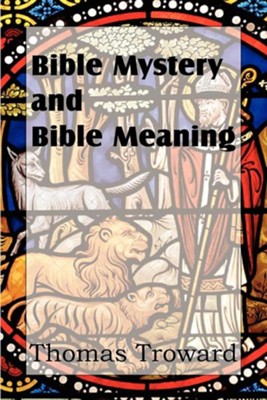 ▼▲
"Jesus says that if a man keeps his saying, he shall never see death (John 8:51); in the Book of Job we are told that if a man has with him "a messenger, an interpreter," he shall be delivered from going down to the pit, and shall return to the days of his youth (Job 33:23-25); the Psalms speak of our renewing our youth (Psalm 103:5); and yet again we are told in Job that by acquainting ourselves with God we shall be at peace, we shall lay up gold as dust and have plenty of silver, we shall decree a thing and it shall be established unto us (Job 22:21-28). "Now, what I propose is that we shall reread the Bible on the supposition that Jesus and these other speakers really meant what they said. Of course, from the standpoint of the traditional interpretation this is a startling proposition. The traditional explanation assumes that it is impossible for these things to be literally true, and therefore it seeks some other meaning in the words, and so gives them a "spiritual" interpretation." Thomas Troward was Her Majesty's Assistant Commissioner and later Divisional Judge of the North Indian Punjab from 1869 until his retirement in 1896. It is this later period for which he is best remembered and most celebrated; in it he was at last able to devote himself to his great interest in metaphysical and esoteric studies. Troward is one of the founding fathers of Mental Science and a leading proponent of the 'New Thought' movement, a forerunner of what is now known as 'New Age' thinking.

▼▲
I'm the author/artist and I want to review Bible Mystery and Bible Meaning.
Back