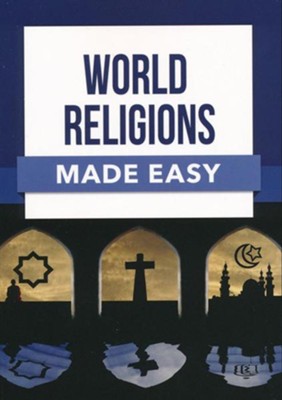 From Islam and Judaism to Jehovah's Witnesses and Mormonism, quickly get a handle on 30 different belief systems and how they compare to Christianity with this pocket-sized book! Packed with clear overviews of world religions, such as Christianity, Hinduism, Buddhism, and Islam, World Religions Made Easy also compares the key beliefs of each.

With billions of people around the world believing in a religion other than Christianity, it is important to understand what they believe, how it compares to Christianity, and how to address common misunderstandings.

See key information at a glance on each religion and cult, including:

Imagine having a solid overview on over 30 world religions and cults, including:

Some belief systems use similar terms, such as salvation and even Jesus, but define them in a totally different way. Strengthen your understanding of Christianity and get practical insight into different faiths so that you can be a more effective witness.

Paul Carden is executive director of the Centers for Apologetics Research (CFAR), and author of Christianity, Cults & Religions (over 1 million copies sold!) He is also former co-host of the nationwide “Bible Answer Man” radio program.

ALSO AVAILABLE IN THE MADE EASY SERIES:

▼▲
I'm the author/artist and I want to review Bible Made Easy: World Religions - PDF Download [Download].
Back
×