Skip to main content
SPRING CYBER EVENT STARTS NOW: And it's a really BIG deal! Up to 88% off through 5/24>
Read the Bible for Life: Your Guide to Understanding & Living God's Word
By: George H. Guthrie
Stock No: WW464541 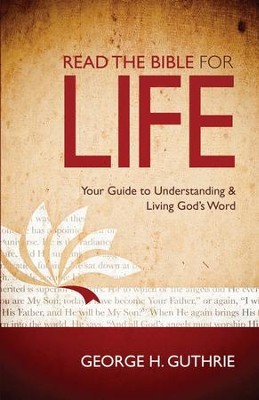 Read the Bible for Life: Your Guide to Understanding & Living God's Word

▼▲
How can you get the most out of Scripture? By reading it attentively, applying it diligently, and allowing it to transform your life! In this layperson's guide, Guthrie interviews well-known scholars to show how each story, psalm, and teaching can illuminate every facet of your daily life. Contributors include Darrell Bock, Karen Jobes, and Michael Card. Paperback.

The Bible may be the most-purchased book in the world, but it is often the least read and least applied due to a basic lack of understanding and motivation on the part of readers. Read the Bible for Life aims to improve biblical literacy in the culture and the church by simultaneously moving readers toward greater skill in reading the Bible well and toward a deeper commitment to applying Scripture to everyday life.

Through a series of down-to-earth conversations with some of today’s brightest scholars, author George Guthrie discusses the basic tools and attitudes needed to read the Bible more effectively. Chapters focus on the various types of literature in Scripture and how to read them well. For instance, how should we read a psalm differently than we read a parable?

How should we read a story of the Old Testament differently than we read a letter from Paul? How can we engage these various parts of Scripture in a way that is truly life-changing? The book also discusses issues such as reading the Bible in context, choosing and reading a Bible translation, reading in times of sorrow or suffering, and reading the Bible with your family. As we better understand how to read the Bible skillfully, we begin to see how every person of the Bible, every psalm, and every teaching fits into the Bible’s powerful, overarching story, and we begin to realize our place in the story God is still writing in the world.

"In the church's dry desert of biblical illiteracy, this book is a drink of cold, refreshing water. With pastoral sensitivity and practical skill, George Guthrie is equipping us to know, understand, and apply the treasures of God's Word in a way that will transform our lives and our communities for the glory of our God. I wholeheartedly recommend Read the Bible For Life for every Christian and every leader in the church."

"In a culture where biblical illiteracy continues to spread like the proverbial plague, George Guthrie has introduced a healing medicine in the form of Read the Bible for Life. This overview of the Bible's nature and content will be welcomed in churches intent on developing biblically grounded followers of Christ. The book's conversational approach provides an easy entry for a generation that tends to read only headlines. With fresh insights for the long time student of God's Word and accessible material for the new student, it is a resource I recommend for all believers."

"The genuine give and take of conversation is key to the Christian community's deeper grasp of the Scriptures. Read the Bible for Life is a celebration of biblical conversation between friends who really love the Word. Hopefully, lots of people will join in."

George H. Guthrie is the Benjamin W. Perry Professor of Bible at Union University in Jackson, Tennessee. He helped establish and is now a Senior Fellow at Union’s Ryan Center for Biblical Studies, which is committed to promoting sound Bible reading, study, and interpretation at the grassroots level of the church. Guthrie has also participated in developing or revising several popular Bible translations including the HCSB, English Standard Version, and New Living Translation.

▼▲
As a Bible scholar at Union University, one of the oldest American universities in the Southern Baptist tradition, Guthrie has tracked the decline in biblical literacy with consternation. With earlier books (The Structure of Hebrews and Biblical Greek Exegesis) best suited for academia, Guthrie has switched gears to produce a reader-friendly, digestible, biblical literacy study program that includes this book as well as a participants workbook, study leaders CD-ROM, and three DVDs for group use. Anyone touched by the English language or Western culture, argues Guthrie, should be conversant in biblical literature. Through informal kitchen-table conversations with evangelical scholars, Guthrie guides the reader through a study of historical context, differences in Bible translations, varieties of literary genres, and finally a heartfelt devotional on how to read the Bible in a postmodern world. Though successful in reaching beyond a Southern Baptist audience, Guthrie remains limited by the Protestant concept of progressive revelation, which prefers later parts of the Bible over earlier ones, a concept not accepted by Roman Catholics or Orthodox Christians. (Jan.) Copyright 2010 Reed Business Information.

▼▲
I'm the author/artist and I want to review Read the Bible for Life: Your Guide to Understanding & Living God's Word.
Back
Back