Skip to main content
Bible Foundations for Marriage & Family Living in the 21st Century
By: Conrad A. Reichert
Stock No: WW774481 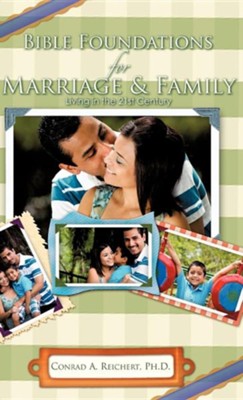 Bible Foundations for Marriage & Family Living in the 21st Century

▼▲
A Blueprint for the Ideal Marriage and Family You say there is no need for religion anymore? You say the Bible isn't relevant anymore? You say those old wedding vows are no longer valid? You say there is no such thing as morality or immorality? You say removing the rules of society that are holding people back will produce true happiness? You say there should be no laws, rules, or social pressures governing sexual behavior? You say the Hippies had it right? You say this sounds crazy? Read about who said these things. Read about the insane night-stalker who said of his family, "We wasn't the Waltons." Read about the judge telling 24 psychologists, "I wouldn't give a nickel for the whole lot of you " Read about how the author went from being a dunce to being a genius in one minute. Dr. Conrad Reichert is a licensed clinical psychologist. He earned the Ph.D. degree in Psychology at Cornell University. He has been in the practice of psychology and family therapy for over thirty years. He has held memberships in several professional societies such as the American Psychological Association, American Philosophical Association, American Home Economics Association, and the American Educational Research Association. He has held offices in several of these societies and presented numerous scholarly papers at their research meetings. He has conducted extensive research in child development and family relationships, and delivered numerous seminars, conferences, and workshops regarding development for children, adults, marriages, and families. He has been a schoolteacher in Christian schools, having taught in all grade levels from Grade 1 to Grade 12, and a professor in a Christian college. He has served as a consultant to the courts, business, industry, education, the church, and the health professions.

▼▲
I'm the author/artist and I want to review Bible Foundations for Marriage & Family Living in the 21st Century.
Back