The Bible Fix: Fixing God's Word to Match the Wisdom of Modern Man
By: Ron Walser 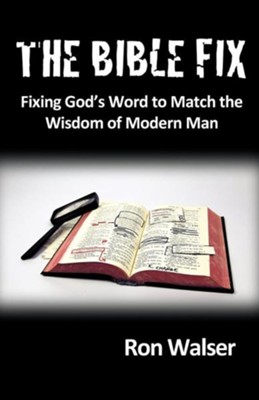 The Bible Fix: Fixing God's Word to Match the Wisdom of Modern Man

For years creationists have defended the early chapters of Genesis by proclaiming, "if the foundations are destroyed, what can the righteous do?"1 The modern theologians in control of mainline churches have chided us for this stand and told us to just teach the CROSS. They claimed that such a dogmatic stance on origins causes controversy in the church and is divisive among church attendees.

Evidence for the fulfillment of Psalms 11:3 came in the form of a 2008 poll by the PEW FORUM.

The June 2008 PEW FORUM ON RELIGION AND PUBLIC LIFE poll found 57% of evangelicals, and 83% of mainline churches believe there are many ways to salvation. Like the issue of Creation many years before, now a majority of those attending church believe that the CROSS is irrelevant. Like Europe, we are becoming more and more humanistic and this generation is selling out to the cultural worldview in huge numbers.

According to this poll, we now have the "foundations" of CREATION and CROSS "destroyed" for a majority of church attendees.

"The Bible Fix" is for both church leaders and church members alike. In this booklet, scripture and science are explored in order to answer this question:

DO WE NEED TO FIX THE BIBLE WE HAVE OR IS IT TIME TO STAND ON THE AUTHORITY OF SCRIPTURE?

▼▲
I'm the author/artist and I want to review The Bible Fix: Fixing God's Word to Match the Wisdom of Modern Man.
Back
×