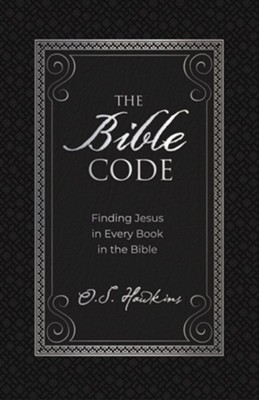 The Bible Code: Finding Jesus in Every Book in the Bible - eBook

You'll understand Jesus' presence in the Old Testament in a new way as you journey with Pastor O. S. Hawkins through the Bible. We often assume Jesus is only in the New Testament. Yet Christ appears in every book of the Bible, sometimes in words, sometimes in shadow, sometimes in prophecy.

As Jesus revealed to the two disciples on the road to Emmaus, He can be found "in all the Scriptures" (Luke 24:27). And as we learn to find Jesus in every verse, we realize His constant presence in our lives as well.

In The Bible Code, bestselling author of The Joshua Code, O. S. Hawkins, takes us from Genesis to Revelation as he illuminates Scripture through the light of Christ.

This book makes a beautiful gift for:

As we seek Jesus in the whole Bible, we find life. Not just eternal life in the then and there, but abundant life in the here and now. And as you see Jesus’ redemptive story from Creation to eternity, you will draw closer to the God who has loved you from the beginning.

O. S. Hawkins is president and chief executive officer of GuideStone Financial Resources of the Southern Baptist Convention. GuideStone serves more than 250,000 individual participants from churches, missionary organizations, colleges and universities, hospitals, and other nonprofit institutions with their financial and benefit service needs. GuideStone Funds is the largest Christian-based mutual fund in the world with assets under management of over 20 billion dollars. Prior to the beginning of his tenure at GuideStone in 1997, Hawkins served as senior pastor of the historic First Baptist Church in Dallas, Texas (1993--1997) and as senior pastor of the First Baptist Church in Fort Lauderdale, Florida (1978--1993) as well as earlier pastorates in Oklahoma.

Hawkins, a native of Fort Worth, Texas, earned the Bachelor of Business Administration degree from Texas Christian University in Fort Worth. He also earned the Master of Divinity and Doctor of Philosophy degrees from Southwestern Baptist Theological Seminary. In addition, he holds the Doctorate of Literature degree from Liberty University (Hon.) as well as several other honorary doctorate degrees.

He has been married to his wife, the former Susan Cavness of Austin, Texas, since 1970. They have two daughters, Wendy and Holly, both of whom are also graduates of TCU. Wendy is married to Brian Hermes and Holly is married to David Shivers. The Hawkins’s also have six grandchildren.

▼▲
I'm the author/artist and I want to review The Bible Code: Finding Jesus in Every Book in the Bible - eBook.
Back
Back