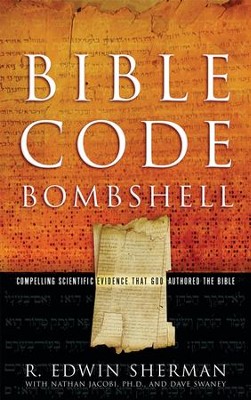 ▼▲
When Ed Sherman, a mathematician with 30 years of experience, and Nathan Jacobi, an Israeli physicist, set out to debunk claims that there were mysterious codes in the Hebrew Old Testament, they could not have envisioned the startling conclusions they would reach.

Explosive evidence that Bible codes point to the life of Christ!

When Ed Sherman, a mathematician with 30 years of experience, and Nathan Jacobi, an Israeli physicist, set out to debunk claims that there were mysterious codes in the Hebrew Old Testament, they could not have envisioned the startling conclusions they would reach. As Dr. Jacobi, an agnostic Jew, looked for lengthy Hebrew codes about Christ, repeatedly he discovered compelling excerpts from the life of the man from Nazareth.

Time and again Dr. Jacobi found that one-or two-word codes were actually part of much longer encoded sentences that echoed the Gospel accounts. Moreover, these encoded sentences were extensively embedded in two passages most widely regarded as prophecies of the crucifixion of Christ (Isaiah 53 and Psalms 22).

Bible Code Bombshellsets forth startling new evidence that code sequences in Scripture are irrefutable evidence of a Divine hand. In this highly readable book, Sherman offers both skeptics and believers a gold mine of information that will prompt much thinking about the origins of the Bible.

R. Edwin Sherman is a Fellow of the Casualty Actuarial Society (F.C.A.S.) and a Member of the American Academy of Actuaries (M.A.A.A.). [Actuaries use probability and statistical analysis to help manage self-insurance programs and insurance companies.] He has advised numerous large financial institutions, Fortune 500 companies and government agencies. Prior to heading his own consulting firm, for seven years he was a Principal at PriceWaterhouseCoopers, the world’s largest accounting and consulting firm.

Mr. Sherman is the founder of the Isaac Newton Bible Code Research Society. The Society’s website (www.biblecodedigest.com) is the number one Bible code resource on the Internet. A Christian since 1972, Mr. Sherman is deeply committed to the impartial examination of the phenomenon of Bible codes. He works with a research team that includes two Hebrew experts, one an agnostic Jew, the other an orthodox Jew.

Mr. Sherman received a B.A. (with Highest Honors) and an M.A. (with High Honors) in Mathematics from the University of California at San Diego. He passed Ph.D. qualifying exams in probability, statistics, real and complex analysis before leaving graduate school to become an actuary. He has authored two prize-winning professional papers and over 70 articles in trade publications devoted to risk management and business insurance.

Mr. Sherman’s articles have appeared in Decision (1998) and Moody (1997). In the late 1980s he played a major role in starting a Rick Warren-style church in Marin County, California. He lives with his wife of 34 years in southern Oregon where they attend Calvary Chapel. Their two adult children live in the Seattle area.

▼▲
I'm the author/artist and I want to review Bible Code Bombshell - eBook.
Back
Back