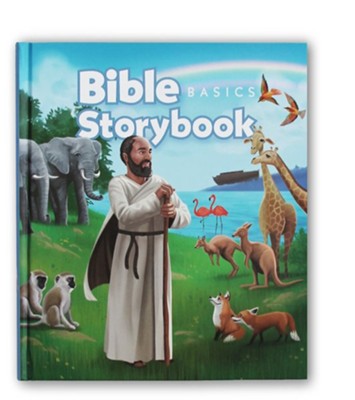 This product is part of our current Big Summer Blowout promotion.
Buy Item

The Bible Basics Storybook helps children build a better faith foundation through the basic stories from the Bible that have captivated and shaped so many! With 149 Old and New Testament stories, children are invited into the Word through beautiful contextual illustrations, retellings that are appropriate for young children, and prayers that connect to our faith.

Great for families and for use with the Bible Story Baiscs Sunday School Curriculum.

The voice of a child praying. The face of a little one captivated by a Bible story. A family sharing a daily devotional.

The Bible Basics Storybook helps you create special family moments with 149 core stories from both the Old and New Testaments. These stories will invite your children into the Word, teach them about Jesus, and keep their attention from start to finish with beautiful and colorful illustrations.

Along with the Bible stories, this Bible storybook includes prayers to start the day, to say at bedtime, and to share before meals, which will help you provide a solid faith foundation for the dear children in your life.

Brittany Sky holds a Bachelor of Arts in Christian Education from Oklahoma City University, and a Master of Arts in Christian Education from Garrett-Evangelical Theological Seminary. Brittany is currently the Senior Editor of Children’s Resources. Before coming to The United Methodist Publishing House, Brittany worked as a minister with children and their families in local UM congregations, and taught children’s ministry workshops for the Oklahoma Annual Conference. Brittany is currently the editor of Deep Blue Large Group/Small Group and Deep Blue Rotation Stations, the writer/editor of All Hands on Deck, Deep Blue Basics, Deep Blue Family Devotional, and the Deep Blue Bible Storybook. Brittany continues to explore approaches to Christian Education that create relevant, vibrant experiences with God for kids. Brittany loves reading, chocolate, and her terriers—Charlie and Lily.

A native of Offenbach, Germany, Ralph Voltz is not the first artist in his family. His great-grandparents and grandmother were accomplished musicians and teachers. His late father was a well-known science fiction author. Lacking musical and writing skills, Ralph continued the family tradition with pencil and brush.

At age 13, Ralph was "commissioned" by his father to draw a cartoon for Perry Rhodan, the longest running sci-fi series in the world. After several revisions, Ralph had received his first lesson in commercial art and earned his first publication.

Despite the family’s proven artistic gene, Ralph’s parents required a bit of reassurance from his high school art teacher that art college was the right path. Ralph earned both BFA and MFA degrees in Illustration from the Savannah College of Art and Design in Georgia and was named "outstanding student in illustration" in his class.

Like many aspiring artists, he, along with two other SCAD grads, relocated to New York. There, he gained more constructive criticism than work but did kick off his commercial career with illustrations for the New York Times Book Review. To support his fledgling art career in NY, he would return to Savannah each fall to teach art classes and coach college soccer.

While working in Savannah one fall, he met his future wife. They decided to relocate to Charlotte, NC. By that time, Ralph had just completed a CD cover and promotion for John Tesh’s Discovery project and also was creating illustrations for three German publishers, including VPM’s Perry Rhodan series.

Ralph started illustrating using traditional painting and drawing media but now creates most of his work digitally. His illustrations have appeared on more than 450 novel and book covers, and he has worked with a variety of agencies, companies and publishers including Duke Energy, UCLA, Random House, National Geographic Publishing, McGraw-Hill, Oxford University Press, Saatchi & Saatchi, Campbell’s Soup, Jim Beam Global, Department of Defense, BIC, Novant Health and Levelor. He is represented by Deborah Wolfe.

Ralph lives in Charlotte, NC, with his wife, Laura, and daughters Josephine and Carly.

▼▲
I'm the author/artist and I want to review Bible Basics Storybook: Building A Faith Foundation.
Back
Back