Skip to main content
Bible Answers for Almost All Your Questions
By: Elmer L. Towns
Stock No: WW63241 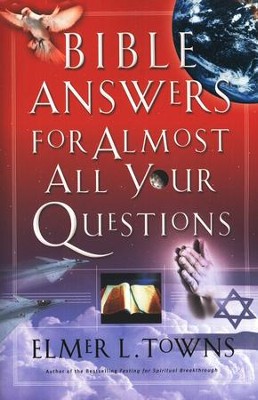 Bible Answers for Almost All Your Questions

▼▲
Will dogs and cats go to heaven? Can angels sing? Should Christians tithe? Why is cloning wrong? Towns's indexed comprehensive resource offers short, knowledgeable, and to-the-point answers from Scripture about everything from politics and creation to angels and demons, prayer, salvation, sin, marriage, and more. If you've got questions---and who doesn't---the Bible has answers! 512 pages, softcover from Nelson.

Why is cloning wrong? Does the Bible say a divorced person can remarry? Can angels sin? Is body piercing wrong? Can demons read our thoughts? Dr. Elmer Towns, author of over 80 books and Dean of Liberty University's School of Religion, answers these and many other questions you have wondered about.Written for the new Christian too embarrassed to ask, and for the long-time Christian who still has unanswered questions, this one-volume, indexed resource provides the kind of responses your own pastor would give as you're shaking hands after the Sunday morning sermon-short, knowledgeable, and to the point. Topics covered include:

If you have questions-and who doesn't-Bible Answers for Almost All Your Questions is an essential resource.

▼▲
Elmer Towns (DMin, Fuller Theological Seminary) is cofounder with Jerry Falwell of Liberty University, where he currently serves as vice president and dean of the school of religion. He is an author and editor of popular and scholarly works, a seminar lecturer, and the creator of over twenty resource packets for leadership education. Dr. Towns has published over fifty books, including four CBA bestsellers and the 1995 Gold Medallion Book of the Year, The Names of the Holy Spirit. A visiting professor at five seminaries, he has received four honorary doctoral degrees. He and his wife, Ruth, have three children.

▼▲
I'm the author/artist and I want to review Bible Answers for Almost All Your Questions.
Back
Back