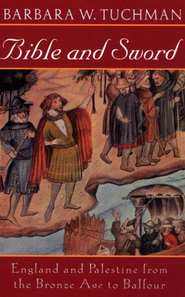 ▼▲
From early times the British people have been drawn to the Holy Land through two major influences: the translation ofthe Bible into English, and later, the imperial need to control the road to India and access the oil of the MiddleEast. Under these influences, one cultural and the otherpolitical-military, countless Englishmen--pilgrims, crusaders, missionairies, merchants, explorers, and surveyors-have made their way to the land of the ancient Hebrews.
With the lucidity and vividness that characterizes allher work, Barbara Tuchman brings to life the development of these twin motives in the consciousness of the British people, until they were finally brought together at the endof World War I when Britain's conquest of Palentine from theTurks and the solemn moment of entering Jerusalem were imminent.

▼▲
From Barbara W. Tuchman, Pulitzer Prize–winning author of The Guns of August, comes history through a wide-angle lens: a fascinating chronicle of Britain’s long relationship with Palestine and the Middle East, from the ancient world to the twentieth century.

Historically, the British were drawn to the Holy Land for two major reasons: first, to translate the Bible into English and, later, to control the road to India and access to the oil of the Middle East. With the lucidity and vividness that characterize all her work, Barbara W. Tuchman follows these twin spiritual and imperial motives—the Bible and the sword—to their seemingly inevitable endpoint, when Britain conquered Palestine at the conclusion of World War I. At that moment, in a gesture of significance and solemnity, the Balfour Declaration of 1917 established a British-sponsored mandate for a national home for the Jewish people. Throughout this characteristically vivid account, Tuchman demonstrates that the seeds of conflict were planted in the Middle East long before the official founding of the modern state of Israel.

Praise for Bible and Sword

"Tuchman is a wise and witty writer, a shrewd observer with a lively command of high drama."—The Philadelphia Inquirer

"In her m&eacute;tier as a narrative popular historical writer, Barbara Tuchman is supreme."—Chicago Sun-Times

▼▲
Barbara W. Tuchman (1912–1989) achieved prominence as a historian with The Zimmermann Telegram and international fame with The Guns of August—a huge bestseller and winner of the Pulitzer Prize. Her other works include Bible and Sword, The Proud Tower, Stilwell and the American Experience in China (for which Tuchman was awarded a second Pulitzer Prize), Notes from China, A Distant Mirror, Practicing History, The March of Folly, and The First Salute.

▼▲
"Tuchman is a wise and witty writer, a shrewd observer with a lively command of high drama."—The Philadelphia Inquirer

"In her m&eacute;tier as a narrative popular historical writer, Barbara Tuchman is supreme."—Chicago Sun-Times

▼▲
I'm the author/artist and I want to review Bible and Sword.
Back