Skip to main content
SPRING CYBER EVENT STARTS NOW: And it's a really BIG deal! Up to 88% off through 5/24>
Beyond Sex Roles: What the Bible Says about a Woman's Place in Church and Family - eBook
By: Gilbert Bilezikian
Stock No: WW12557EB 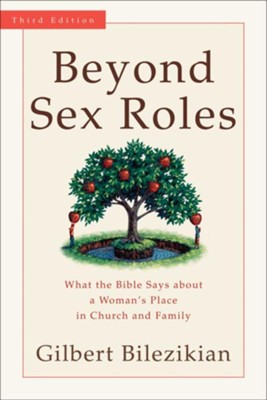 Beyond Sex Roles: What the Bible Says about a Woman's Place in Church and Family - eBook

▼▲
This biblical and theological study offers an accessible examination of the key texts of Scripture pertinent to understanding female roles, affirming full equality of the sexes in family and church. The book advocates an interpretive method that sees God's revelation of himself and his will as progressive. Using a creation-fall-redemption hermeneutical model, Beyond Sex Roles leads readers in developing a coherent method of interpretation for understanding the roles of women in church and family.

Gilbert Bilezikian deliberately avoids using scholarly jargon and complex argumentation in the main text of the book to encourage readers to interact with the biblical research. The aim is for nonspecialized readers to be able to follow his discussion step-by-step, evaluate arguments, consider alternative views, and arrive at independent conclusions. This classic work on the egalitarian viewpoint will be a useful guide in undergraduate courses on gender and church life.

The third edition contains an updated bibliography and the text has been revised throughout.

Gilbert G. Bilezikian (Th.D., Boston University) is professor of biblical studies emeritus at Wheaton College. He is a charter member and elder at Willow Creek Community Church and the author of a number of books, including Community 101.

▼▲
This first-rate biblical and theological study offers an accessible examination of the key texts of Scripture pertinent to understanding female roles, affirming full equality of the sexes in family and church. The third edition has been revised throughout. Gilbert Bilezikian avoids using scholarly jargon and complex argumentation in the main text of the book to encourage readers to interact with the biblical research. The aim is for nonspecialized readers to be able to follow his discussion step-by-step, evaluate arguments, consider alternative views, and arrive at independent conclusions. The study guide format of the book is designed for either individual investigation or group work. Pastors, church leaders, students, and those interested in issues relating to gender and church life will value this classic work on the egalitarian viewpoint.

▼▲
Gilbert Bilezikian (ThD, Boston University) is professor of biblical studies emeritus at Wheaton College. He is a charter member and elder at Willow Creek Community Church and the author of a number of books, including Community 101.

Perhaps the best way to appreciate the significance of Beyond Sex Roles, now re-published in a third edition, is to recall the historical context of the mid-1980s in which it was first written. The modern biblical equality movement was still in its infancy. Some Christian writers were already arguing for gender equality and mutuality in the 1970s and early 1980s, but not all of them grounded their arguments in a high view of Scripture. Helpful exceptions included Patricia Gundry, Margaret Howe, Mary Evans, and Aída Besanaçon Spencer, but the list was not long and it did not include many men.

Naturally there was "push back" from the defenders of traditional Christian patriarchy, and that resistance included a book published in 1981 by James B. Hurley, now professor of marriage and family therapy at Reformed Theological Seminary in Jackson, Mississippi. He had just earned a Ph.D. from Cambridge University for his close reading of the biblical text on this topic. Man and Woman in Biblical Perspective, the fruit of his research, was selected as a Gold Medallion Book of the Year by the Evangelical Christian Publishers Association. Hurley argued that benevolent male authority is God's will for male-female relationships.

This is where Gilbert Bilezikian - gifted scholar and communicator, native of France, long-time Wheaton professor of theology, and a founding leader of Willow Creek Community Church ­ came in. He recognized Hurley as a worthy opponent, and, if you'll pardon an insider pun, decided to go "head" to "head" with him. In Beyond Sex Roles (first edition, 1985), Bilezikian reverently explored the same passages of Scripture as Hurley had, and offered a meticulously­supported "second opinion" on its true meaning and intent.

Reading Bilezikian in one hand and Hurley in the other is like having a ring-side seat while two heavyweights duke it out. There are no cheap shots or sneers in Bilezikian's rebuttal, but there's plenty of Gallic passion, and more than a little bracing wit and candor. He describes an anonymous former colleague, for example, as "a pompous and bombastic man" who managed to survive because his duties were fulfilled by an unsung female assistant "gifted with genius-level intelligence and a phenomenal capacity for hard work" (p. 9). Many can identify. Elsewhere he asserts that "by maintaining women in relations of dependency, men guarantee the infantilization of their female companions" (p. 162). He even dares to label the subjection of women as satanic in origin (p. 41). You get the idea. Bilezikian packs a punch.

Most importantly, Beyond Sex Roles offers strong proof that it people who took the Bible very, very seriously could legitimately affirm gender equality and mutuality. Two years later Bilezikian helped found Christians for Biblical Equality, and in 1989 he co-authored the CBE manifesto "Men, Women, and Biblical Equality." The rest is our living history.

Through its three editions, the book's main text and notes have remained relatively unchanged. In the third edition (2006), three new sections have been added at the end, replacing the polemical appendix from the second edition (1991). Frantic readers will appreciate the convenient new sixteen-page summary of the book. A series of ten "review exercises" encourages readers to engage Scripture directly as they sort things out for themselves. These two appendices were previously published in Priscilla Papers. The last innovation is an updated bibliography prepared by Alan Johnson.

Egalitarian scholarship has broadened and deepened since this pioneering work was first published. Understandably, many of its arguments are now expressed more fully and clearly elsewhere. And inevitably the book contains some interpretations that have not survived the rigors of scholarly debate over the last twenty years. But what impresses me is how many features of Beyond Sex Roles anticipate (and undoubtedly helped shape) the current egalitarian consensus. One is the insight that gender equality is the goal of a progressively revealed and inexorably restoring movement of God's Spirit through Scripture and history. Already back in the 1980s Bilezikian was drawing us into this hopeful and compelling vision. And the book was never about just gender. It is infused with the conviction that Christ was, and by his Spirit still is, dismantling all the vertical structures of power and oppression in fallen human society, in order to make way for one new, liberating and inclusive community of God. The author invites us to live ahead of the curve. For these and other reasons, this book has my vote for the CBE version of Cooperstown.

▼▲
I'm the author/artist and I want to review Beyond Sex Roles: What the Bible Says about a Woman's Place in Church and Family - eBook.
Back
Back