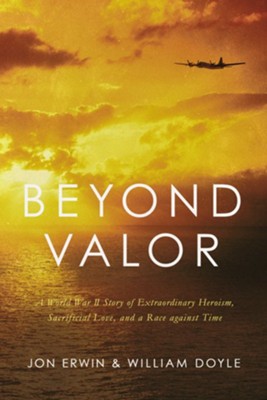 ▼▲
In April 1945, when a bomb detonates inside an American B-29 heading for Japan, Sgt. Henry Erwin absorbs the blast and throws the still-flaming projectile overboard. The military hospital expects him to die from the third-degree burns. But can his teenage bride's mission of against-all-odds healing change the young soldier's destiny? A miraculous true story. 240 pages, hardcover from Nelson.

On April 12, 1945, a fleet of American B-29 bombers flew toward Japan. Their mission was simple: Stop World War II by burning the cities, factories, and military bases of the Japanese em&shy;pire, thereby forcing an unconditional surrender. But it didn't go as planned. Beyond Valor is one soldier's extraordinary tale of bravery, faith, and devotion.

Onboard one of the B-29s, the City of Los Angeles, a phosphorus bomb detonated inside the plane. Staff Sergeant Henry E. "Red" Erwin absorbed the blast of burning phosphorus and managed to throw the still-flaming bomb overboard be&shy;fore collapsing from the third-degree burns that covered his body.

Breaking protocol, the plane diverted to a military hospital at Iwo Jima. President Truman quickly ordered that Erwin be awarded the Medal of Honor, the highest honor of the American military.

Drawn from in-depth interviews with eyewitnesses and deep archival research, Beyond Valor tells the gripping story of Erwin's life--from his upbringing in the suburbs of Birmingham, Alabama to his enduring commitment to supporting veterans. Beyond Valor gives you a front-row seat to Erwin's amazing life and legacy. Along the way, you'll learn:

Beyond Valor is about more than that fateful day in April 1945. It's a story of one man's journey from the ultimate despair to a place beyond service, beyond honor, and beyond valor: a life illuminated by the light of God's love.

Jon Erwin, the grandson of Medal of Honor recipient Henry E. "Red" Erwin isan American film director and producer. With his brother Andrew, he is among only eight directors to receive the incredibly rare A+ Cinemascore not once but twice, joining a list that includes Steven Spielberg and Robert Zemeckis. Their film I Can Only Imagine was the #1 independent movie of 2018. The brothers have a multi-year film and TV deal at Lionsgate and are developing Beyond Valor into a major motion picture

William Doyle is the award winning, New York Times bestselling author of ten nonfiction books, and has produced TV shows for HBO, the History Channel, and PBS. He is coauthor with Chris Kyle of American Gun and, with Dick Couch, of Navy SEALs. He is also author of the highly acclaimed 2015 book PT 109: An American Epic of War, Survival, and the Destiny of John F. Kennedy. Doyle is a Fulbright Scholar and the son of a US Army combat veteran who served in the Pacific theater during World War II.

▼▲
I'm the author/artist and I want to review Beyond Valor.
Back
Back